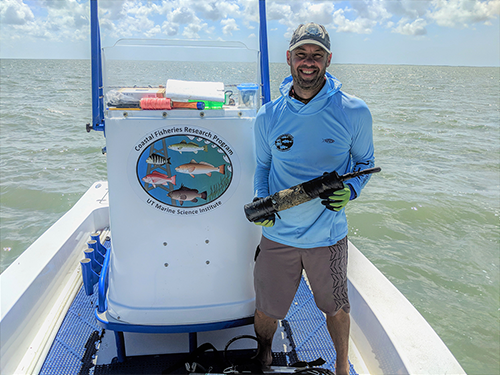 The location and frequency of spawning (reproduction) in fish has a direct effect on the abundance, stability, and resilience of a fish population. Major storm events, such as hurricanes, provide a natural experiment to test the ability of a fish population to withstand disturbances. Acoustic monitoring of Spotted Seatrout spawning revealed that these fish are extremely productive, spawning every day of the spawning season (April – September), including during a category 4 hurricane. These results illustrate the amazing resilience of estuarine fishes to intense disturbances and their potential to cope with projected increases in extreme weather events in the future.

Spotted Seatrout and many other species of “drum fish” make characteristic sounds during spawning (figure 1), which can be heard on underwater microphones, or hydrophones. This allows us to remotely monitor when fish spawn and how long they spawn for, which is especially helpful in murky water, where it is difficult to see. Seatrout spawning can be identified within the audio recordings by analyzing the intensity of the sound within the specific frequency range (250-500 Hz) of the Spotted Seatrout calls.

We monitored Spotted Seatrout spawning from April to September 2017 at 15 sites within the estuaries of South Texas, to see how changes in environmental conditions affected spawning. Our study also coincided with a category 4 hurricane. Hurricane Harvey made landfall 9 km east of Rockport, Texas on August 25, 2017 at 17:00 h CST. The eye of the storm was 28 km wide, maximum sustained winds were 59 m s-1 with gusts up to 65 m s-1, and the storm surge caused water levels to rise 3.8 meters above ground level.

The sound pressure level within the frequency range of seatrout spawning sounds peaked every evening between 20:00 and 21:00, indicating that spawning was occurring on a daily basis. During the hurricane wind-associated noise masked any potential spawning sounds, except at two stations that were directly in the path of the hurricane. When the eye of the storm was directly overhead those stations, wind-associated noise decreased, and spawning sounds were audible (figure 2). The time that spawning began shifted two hours earlier for five days after the storm, which may have been partly caused by the decrease in water temperature. 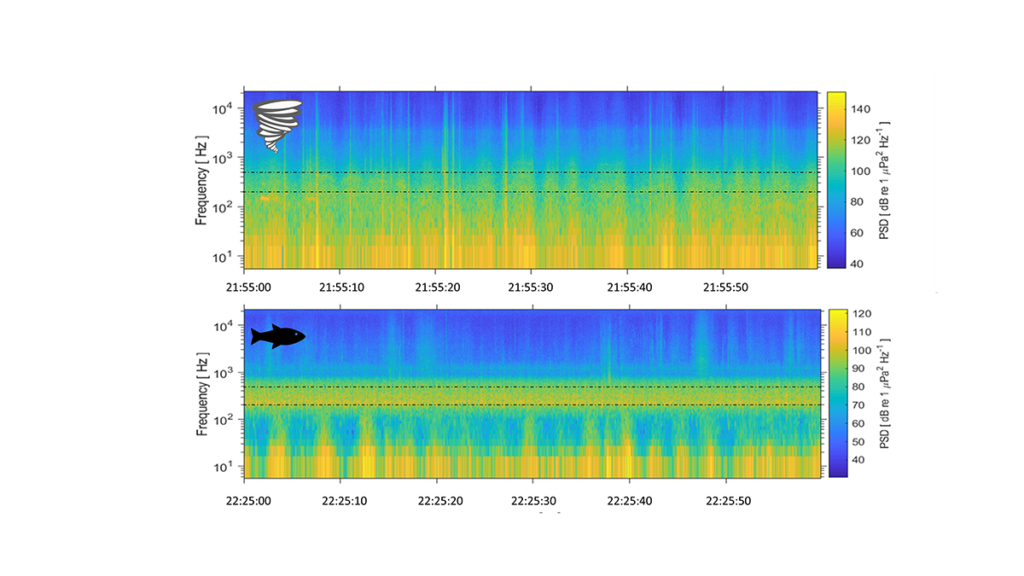 Figure 2. Spectrograms of recordings during Hurricane Harvey showing storm noise at 21:55 and seatrout chorusing at 22:25 within the 250-500 Hz bandwith (dotted lines).

Species that live and spawn in estuaries must deal with conditions that can change rapidly and unpredictably. It is important to understand how those changes impact spawning activity in order to maintain sustainable populations for the fishing industry. Further, understanding how fish respond to environmental disturbances in these environments may offer insight on how fish will respond to climate change and other human impacts elsewhere. 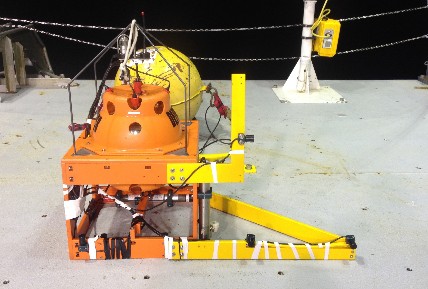 Figure 1. The autonomous Deep Sound acoustic recorder on the rear deck of the R/V Neil Armstrong

The ocean is a natural acoustic waveguide, bounded by the sea surface and seabed, inside which sound can travel large distances. In the frequency range of 10’s – 1000’s of Hertz, seawater is nearly transparent to sound, absorbing only a small fraction of energy of the acoustic wave as it propagates in the ocean. However, sound transmitted in this shallow water ocean waveguide reflects off the bottom, losing some energy which is either transmitted into the bottom, or absorbed by the sediment. In order to predict and model the distances over which any acoustic ocean monitoring, detection, or communication systems may operate, accurate knowledge of the acoustic properties (the sound speed, attenuation, and density) of the seabed must be known.

The majority of the ocean’s bottom has a top layer of sand or gravel, where the grain sizes are large enough that gravity and friction dictate the micro-physics at inter-granular contacts and play a large roll in determining the sound speed and attenuation in the material. In silts and clays (a.k.a. muds), grain sizes are on the order of microns or less, so electrochemical forces become the dominant factor responsible for the mechanics of the medium. Mud particles are usually elongated, with high length-to-width ratios, and when consolidated they form stacks of parallel grains and ‘card-house’ structures, giving the ensemble mechanical and acoustical properties unlike larger grained sands.

In March and April 2017, as part of the ONR-supported Seabed Characterization Experiment (SCE) designed to investigate the geo-acoustic properties of fine-grained sediments, a bottom lander known as Deep Sound was deployed on the New England Mud Patch (NEMP) from the R/V Neil Armstrong. The NEMP occupies an area of approximately 13,000 km2 off the east coast of the USA, 95 km south of Martha’s Vineyard, and is 170 km wide, descending 75 km across the continental shelf with an unusually smooth bathymetry. The region is characterized by a layer of mud, accumulated over the last 10,000 years, estimated to be as thick as 13 meters [1]. 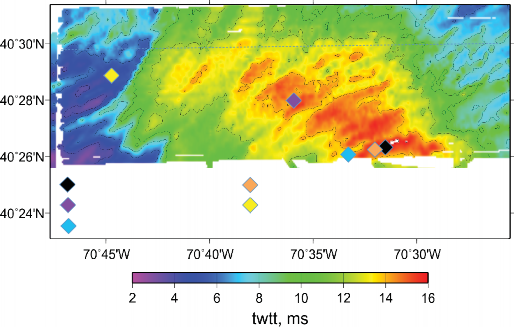 Figure 2. Location of the five Deep Sound deployments, plotted over the two-way travel time, a proxy for mud layer thickness (where 16 milliseconds is equivalent to 13 meters)

The American naturalist Louis François de Pourtalès first described this ocean feature in 1872 [2], in the context of a convenient navigation aid for whaling ships headed into Nantucket and New Bedford. Sailors would make depth soundings using a lead weight with a plug of wax on the bottom which collected a small sample of the seabed. Since the mud bottom was unique along the New England seaboard, ships were able to determine their location in relation to their home ports in foggy weather.

Deep Sound (Fig. 1) is a free-falling (untethered), four channel acoustic recorder designed to descend from the ocean’s surface to a pre-assigned depth, or until pre-assigned conditions are met, at which point it drops an iron weight and returns to the surface under its own buoyancy with a speed of ~0.5 m/s in either direction. In this case, the instrument was configured to land on the seabed, with the hydrophones arranged in an inverted ‘T’ shape, and continue recording until either a timer expired, or a battery charge threshold was crossed. Almost 30 hours of ambient noise data were collected at five locations on the NEMP, shown in Fig. 2.

From the vertical coherence of the ambient noise, information about the geo-acoustic properties of the seabed was extracted by fitting the data to a model of ocean noise, based on an infinite sheet of sources, representing the bubbles generated by breaking ocean surface waves. The inversion returned estimates of five geo-acoustic properties of the bottom: the sound speed and attenuation, the shear-wave speed and attenuation, and the density of the muddy seabed.

We are trying to change the way kidney stones are managed. Our solution is a painless, one-hour session where stones are identified, broken, and expelled from the kidney to pass naturally. This is an update on current progress to the doorstep of FDA clearance of an expelling system and first in human trials of a stone breaking system.

Stones are common and are currently managed in a long, costly, painful process. One in 11 Americans will have stones and cost of disease is $10B annually in the U.S. Stones are painful when they obstruct urine flow out of the kidney. Most people go to the Emergency Department where they to sent to a radiology department for a CT exam and then are given pain medication. They are expected to pass the stone within 3 weeks. If pain cannot be managed a surgery is performed to allow urine out of the kidney but not to remove the stone. If the first surgery has been performed, the stone is too large to pass or does not pass, or symptoms cannot be controlled, the patient has surgery to break the stone or stones usually with the expectation of the patient passing the fragments naturally. About one-third of surgeries leave fragments that can grow to again be symptomatic stones. Recurrence requiring intervention is about 50% within 5 years. Patients after the second stone event are usually monitored by CT annually for new stones. This process subjects patients to pain, anxiety, and ionizing radiation over a long time.

Our talk presents an update on our new non-invasive stone removal technology.  We will present progress and results of several parallel clinical trials.  Our NASA-funded study is to reposition an obstructing stone in the Emergency Department to relieve pain. One NIH-funded study is a randomized clinical trial to measure long term benefit of expelling fragments that remain after surgery. The status and design of studies to test the complete imaging, breaking and expelling technology will also be discussed. So far over 50 subjects are participating in the clinical trials.

We also will mention plans to improve the technology and further expand its use. This includes outputs to break stone faster based on image guided feedback of the progression of the individual’s specific procedure and stone characteristics. It also includes tractor beam technology to grab and steer stones and fragments through the complex three-dimensional path out of the kidney. Other talks in the session provide more detail on the development of these additional technologies.

Figure 1 shows a movie taken from a camera inside a patient’s kidney while the ultrasound sent from a probe on the patient’s skin causes an 4-mm (1/4 inch) kidney stone to move out of the kidney. 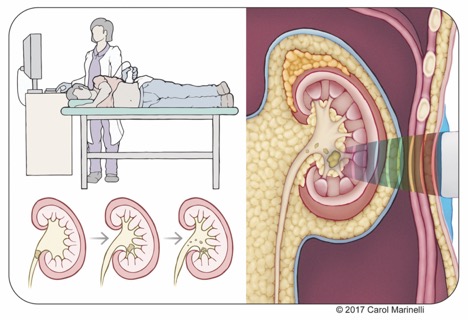 Figure 2 is a drawing of the new system and process.

Many centuries ago glass blowers observed that sound could be generated when blowing through a hot bulb from the cold end of a narrow tube. This phenomenon is a result of thermoacoustic oscillations: a pressure wave propagating in a compressible fluid (e.g. air) can sustain or amplify itself when being provided heat. To date, thermoacoustic engines and refrigerators have had remarkable impacts on many industrial applications.

After many centuries of thermoacoustic science in fluids, it seems natural to wonder if such a mechanism could also exist in solids. Is it reasonable to conceive thermoacoustics of solids? Can a metal bar start vibrating when provided heat?

The study of the effects of heat on the dynamics of solids has a long and distinguished history. The theory of thermoelasticity, which explains the mutual interaction between elastic and thermal waves, has been an active field of research since the 1950s. However, the classical theory of thermoelasticity does not address instability phenomena that can arise when considering the motion of a solid in the presence of a thermal gradient. In an analogous way to fluids, a solid element contracts when it cools down and expands when it is heated up. If the solid contracts less when cooled and expands more when heated, the resulting motion will grow with time. In other terms, self-sustained vibratory response of a solid could be achieved due to the application of heat. Such a phenomenon would represent the exact counterpart in solids of the well-known thermoacoustic effect in fluids.

By using theoretical models and numerical simulations, our study indicates that a small mechanical perturbation in a thin metal rod can give rise to sustained vibrations if a small segment of the rod is subject to a controlled temperature gradient. The existence of this physical phenomenon in solids is quite remarkable, so one might ask why it was not observed before despite the science of thermoacoustics have been known for centuries.

“Figure 1. The sketch of the solid-state thermoacoustic device and the plot of the self-amplifying vibratory response.”

It appears that, under the same conditions of mechanical excitation and temperature, a solid tends to be more “stable” than a fluid. The combination of smaller pressure oscillations and higher dissipative effects (due to structural damping) in solids tends to suppress the dynamic instability that is at the origin of the thermoacoustic response. Our study shows that, with a proper design of the thermoacoustic device, these adverse conditions can be overcome and a self-sustained response can be obtained. The interface conditions are also more complicated to achieve in a solid device and dictates a more elaborate design.

Nonetheless, this study shows clear theoretical evidence of the existence of the thermoacoustic oscillations in solids and suggests that applications of solid-state engines and refrigerators could be in reach within the next few years.