Popular version of 4aAB7 – Managing vessel-generated underwater noise to reduce acoustic impacts to killer whales
Presented at the 181st Acoustical Society of America Meeting at 10:40 AM PST on Thursday, December 2, 2021
Click here to read the abstract

Every year, thousands of ships en route to Canada’s largest port, the Port of Vancouver, transit through the Pacific Ocean’s richly biodiverse Salish Sea, home to a vast array of marine life including the endangered Southern Resident killer whale.
As Southern Resident killer whales rely on sound to survive, underwater noise from commercial ships can interfere with their ability to hunt, navigate, and communicate, which is why both the Canadian and U.S. governments recognize “acoustic disturbance” as one of the key threats to the species’ recovery.
To better understand and reduce the effects of vessel-generated noise on local whale populations, the Vancouver Fraser Port Authority launched the Enhancing Cetacean Habitat and Observation (ECHO) Program in 2014. The ECHO Program coordinates research projects to advance our understanding of underwater vessel noise and since 2017, has led seasonal initiatives encouraging ships to slow down or stay distanced to reduce underwater vessel noise while transiting through Southern Resident killer whale foraging areas.
To achieve high levels of participation in its voluntary initiatives, the ECHO Program works closely with both Canadian and US marine transportation industry, vessel traffic management agencies and pilots and captains aboard commercial vessels. During the last two seasonal slowdowns, over 90% of piloted commercial vessels voluntarily reduced speed in Haro Strait and Boundary Pass, key areas of Southern Resident killer whale critical habitat. In-water measurements collected on behalf of the ECHO Program and the Government of Canada have shown that for the vast majority of ships plying the waters of the Salish Sea, reduced speeds result in measurable reductions in underwater noise generated both at the ship source, and in nearby whale habitats.
Hear the difference: Underwater sound from the same container ship operating at regular and reduced speeds

To date, more than 6,000 ships have participated in the ECHO Program’s voluntary underwater noise reduction initiatives, by either slowing down, or moving away from key areas, across 74 nautical miles of shipping routes in the Salish Sea. During the summer of 2020, these initiatives helped achieve a nearly 50% reduction in underwater sound intensity from commercial shipping, in key Southern Resident killer whale foraging areas.
The endangered Southern Resident killer whales face many challenges to their recovery, and underwater noise from vessel traffic is just one of these challenges. Through science-based decisions and regional collaboration, the ECHO Program partners are proving that voluntary efforts can help make a difference. 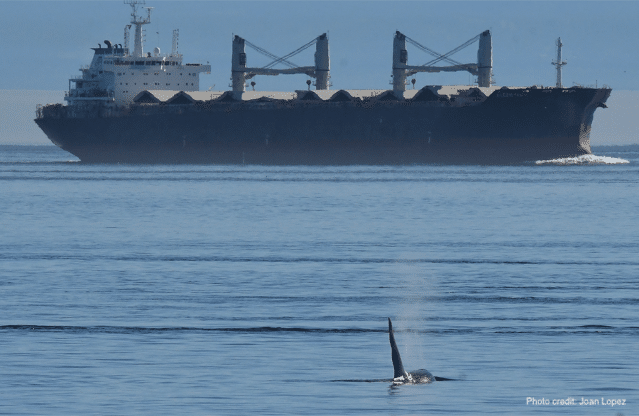 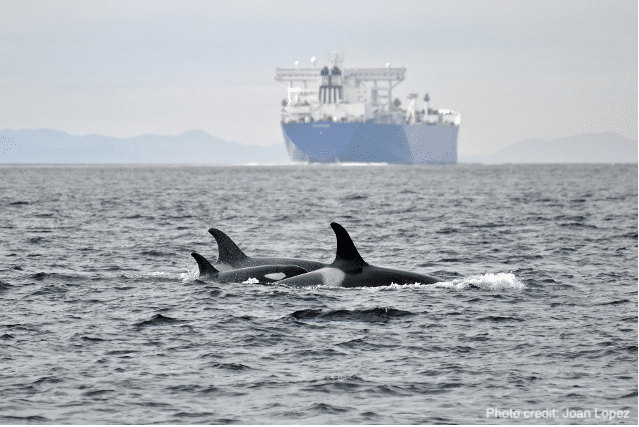 A pod of killer whales (orcinus orca) travel nearby a commercial ship in pod formation. The southern resident killer population is made up of three matrilineal pods (J, K, L), which are led by the eldest female. (Photo credit: Joan Lopez)