181st Meeting of the Acoustical Society of America in Seattle, Washington.

Ultrasound is a tremendously valuable tool for medical imaging and therapy of the human body. When it comes to applications in the brain, however, the presence of the skull poses severe challenges to both imaging and therapy. The skulls of human adults induce significant distortions (also called phase aberrations) to the acoustic waves. The aberrations result in blurred brain images that are extremely challenging to interpret. The skull also distorts and shifts the acoustic focus, causing challenges in therapy of the brain (such as treating essential tremors and brain tumors) using high-intensity focused ultrasound.

We propose an ultrasound-based method to extract the skull properties. This method is safer because ultrasound does not cause ionizing radiation. We developed an artificial intelligence (AI) algorithm (specifically, a deep learning algorithm) that predicted the skull thickness and sound speed by using ultrasound echo signals reflected from the skull.

We tested the feasibility of our method through a simulation study (Figure 1). We performed acoustic simulations using realistic skull models built from CT scans of five ex vivo human skulls (see animation). The simulations generated a large number (=7891) of ultrasound signals from skull segments for which the thickness and sound speed were known. We used 80% of the data to train our AI algorithm and 20% for testing. We developed and tested two algorithm versions: One version took the original echo signal as the input and the other used a transformed signal (i.e., Fourier transform that displays the signal’s frequency spectrum). 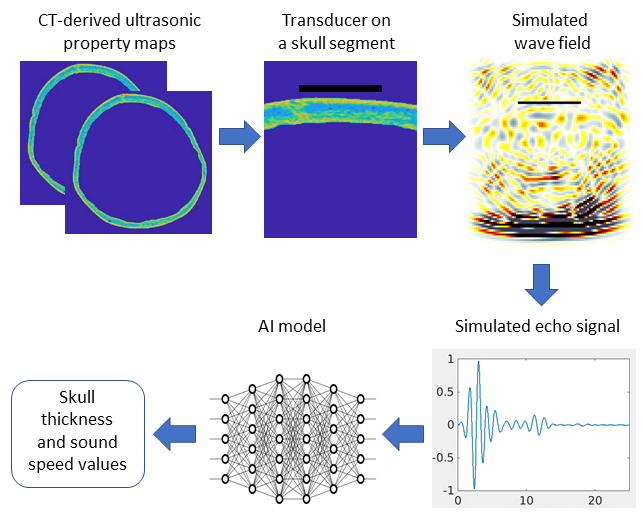 [Animation: 3-dimensional density map of one of the skulls used in the study]