To address this, we measured the resonant structure of three guitars during their construction. Two guitars are of the Orchestra Model (OM) style and were made by the Santa Cruz Guitar Company. The third is an 000-28 style guitar built by the author. The guitars were measured at multiple stages while being constructed, including: during the bracing of the top, construction of the box, sanding, application of polish, and once fully constructed. The stages of construction of the 000-28 are shown in Figure 2.

Figure 1: The three guitars in their completed state. The left and center guitars are the OMs and the right guitar is the 000-28.

The resonant structure was measured by using a small hammer to impart a force to the instrument, and a laser Doppler vibrometer to measure the resulting vibrations. This provided the frequency and amplitude of each structural resonance as well as how long it would ring once struck. 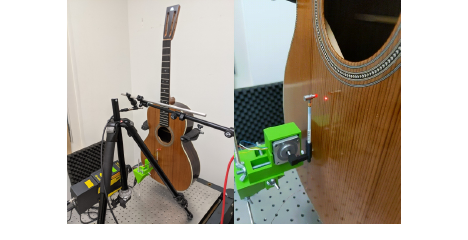 The lowest resonances are the most important, because they fall near the fundamental frequencies of most notes on the guitar, so we tracked how the first three prominent resonances changed. Figure 4 shows the frequency response of the 000-28 with the box constructed and sanded (top right of Fig. 2) and the guitar fully constructed (bottom right of Fig. 2). The lowest three prominent resonances are circled and their structural mode shapes are shown for the guitar box.

We observed some general trends as the guitar evolves, such as the resonant frequencies and amplitudes decreasing as the guitar nears completion, particularly as the polish is applied. If one is trying to achieve a specific sonic quality from an instrument, we recommend taking measurements before the final sanding and adjusting the amount of sanding based on these observations. Final alterations can be made by carving the braces through the sound hole.