A house mouse, mus musculus, historically shares the human environment without much permission. It lives in our homes, enjoys our husbandry, and passes through walls and administrative borders unnoticed and unaware of our wary attention. Over the thousands of years of coexistence, mice excelled in a carrot and stick approach. Likewise, an ordinary wild mouse brings both danger and cure to humans todays. A danger is in the form of rodent-borne diseases, amongst them plague epidemics, well remembered in European medieval history, continue to pose a threat to human health. A cure is in the form of lending themselves as research subjects for new therapeutic agents, an airily misapprehension of genomic similarities, small size, and short life span. Moreover, physiological similarity in inner ear construction, brain auditory responses and unexpected richness in vocal signaling attested to the tremendous interest to mice bioacoustics and emotion perception.

The goal of this work is to start addressing possible threats reportedly carried by invasive species crossing US borders unnoticed in multiple cargo containers. This study focuses on demonstrating the feasibility of acoustic detection of potential rodent intrusions.

In this study, mice sounds were recorded in a laboratory environment at an animal facility at Stony Brook University Hospital. The mice were allowed to move freely, a major condition for their vocalization in ultrasonic range. Confined to cages, mice did not produce ultrasonic signals. Four different microphones with flat ultrasonic frequency response were positioned in various arrangements and distances from the subjects. The distances varied from a few centimeters to several meters. An exemplary setup is shown in Figure 1. Three microphones, sensitive in the frequency range between 20 kHz and 100 kHz, were connected to preamplifiers via digital converters to a computer equipped with dedicated sound recording software. The fourth calibrated microphone was used for measurements of absolute sound level produced by a mouse. The spectrograms were monitored by an operator in real time to detect the onset of mice communications and simplify line data processing. 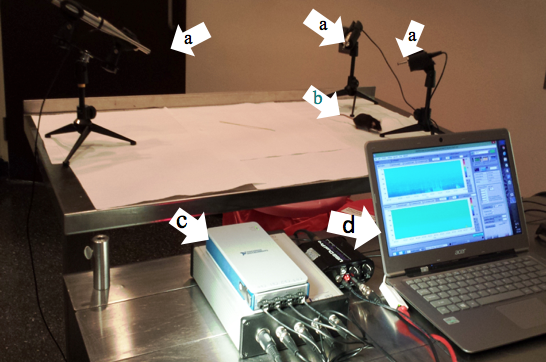 This sound fragment was down converted (slowed down) fifteen times to be audible. In reality, mice social songs are well above the human audible range and are very fast. The spectrograms of mice vocalization at distances of 1 m and 5 m are shown in Figure 2. Mice vocalization was detectable at 5 m and retained recognizable vocalization pattern. Farther distances were not tested due to the limitation of the room size.

The real time detection of mice vocalization required detection of the fast, noise insensitive and automated algorithm. An innovative approach was required. Recognizing that no animal communication comes close to become a language, the richness and diversity of mice ultrasonic vocalization prompted us to apply speech processing measures for their real time detection. A number of generic speech processing measures such temporal signal to noise ratio, cepstral distance, and likelihood ratio were tested for the detection of mice vocalization events in the presence of background noise.  These measures were calculated from acoustical measurements and compared with conventional techniques, such as bandpass filtering, spectral power, or continuous monitoring of signal frames for the presence of expected tones.

As a secondary goal of this study, upon successful acoustic detection, the mice vocalization needed to be processed to determine animal location. It was of main interest for border patrol applications, where both acoustic detection and spatial localization are critical, and because mice movement has a behavioral specificity. To prove the localization feasibility, detected vocalization events from each microphone pair were processed to determine the time difference of arrival (TDOA). The analysis was limited to nearby locations by relatively short cabling system. Because the animals were moving freely on the surface of a laboratory table, roughly coplanar with microphones, the TDOA values were converted to the animal location using simple triangulation scheme. The process is illustrated schematically in Figure 3 for two selected microphones. Note that despite low signal to noise ratio for the microphone 2, the vocalization events were successfully detected. The cross correlograms, calculated in spectral domain with empirical normalization to suppress the effect of uncorrelated noise, yielded reliable TDOA. A simple check for the zero sum of TDOA was used as a consistency control. Calculated TDOA were converted into spatial locations, which were assessed for correctness, experimental and computational uncertainties and compared with available video recordings. Despite relatively high level of technogenic noise, the TDOA calculated locations agreed well with video recordings. The TDOA localization uncertainty was estimated on the order of the mouse size, roughly corresponding to several wavelengths at 50 kHz. A larger number of microphones is expected to improve detectability and enable more precise three dimensional localization.

Hence, mice ultrasonic socialization sounds are detectable by the application of speech processing techniques, their TDOA are identifiable by cross correlation and provide decent spatial localization of animals in agreement with video observations.