Based on quieter engines that have evolved over decades with electric, hybrid, and many internal combustion engine vehicles, authoritative voices tell us that the problem of noisy cars has been solved. Moving vehicles may be quieter now, but this is not the case for cars that are stationary.

Most vehicles manufactured for the North American market feature an audible signal that assures owners that they have locked their cars. Roughly half of cars sold in the U.S. and Canada use an electronic tone, while the rest use a horn sound. Most cars offer the option to use a visual signal.

Owners can lock a car and arm its security system without use of any signal, but this feature is rarely discussed when buying a car. With some cars, remote start, stages of battery charging, and stages of filling a tire with air use a horn signal. Some brands have incorporated horn sounds to signify that the engine is running when its driver has left the car.

Many people are unaware of acoustic vehicle signals, or the fact that some horn sounds are emitted from parked cars. Awareness may occur after buying a car or when walking in front of a car that is being locked. When one’s home faces a parking lot or street parking, sleep disruption can occur, and annoyance can affect the ability to return to sleep.

This study was conducted to explore common experiences related to sleep disruption caused by remote horn signaling, using content analysis of online complaints posted in discussion forums and forums created by car owners who want to disable the sound. The study uses a database that was compiled as part of a noise activism endeavor called the Silence the Horns project. 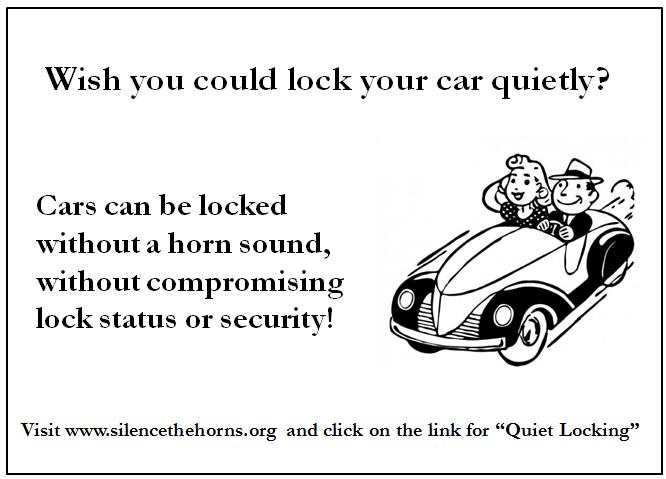 In complaint forum posts, remote horn signals are described as a source of sleep disruption, reduced quality of life, annoyance, and emotional and physical stress responses. Other concerns include hearing health, safety, and legal considerations. Posts can provide useful information, even as some authors introduce a degree of antagonism. [1]

Car owner forum posts are practical. Authors may not mention a reason for wanting to eliminate the horn sound, but when they do, concerns include general consideration for neighbors, specific concerns about sleep disruption of a family member or neighbor, and embarrassment about creating a sound that brings attention. Authors are helpful, often post in other auto topic forums, and set a friendly tone. [2] 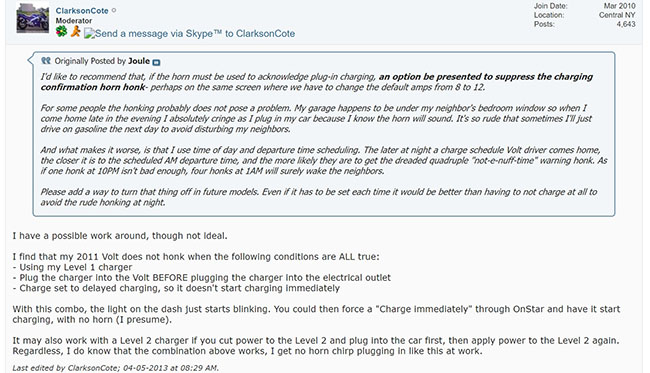 Online forum data will continue to be added to the database throughout 2019. It is hoped that auto industry stakeholders might consider sleep disruption to be an important unintended consequence of horn use with lock confirmation in future car models.

If passed, proposed Senate bill S.543, the Protecting Americans from the Risks of Keyless Ignition Technology Act, would protect consumers from the risk of carbon monoxide poisoning related to cars inadvertently left with the engine running. [3, 4] Stakeholders should be aware that consumers are eliminating horn sounds that automakers implemented to discourage leaving a car with the engine running.

[1] ParaPundit forum, Locking A Car With A Short Horn Blast Is Rude and Obnoxious
http://www.parapundit.com/archives/002265.html