The face of the facility: acoustic design of lobbies

Lobbies are a facility’s initial destination, the point of departure, the information center, and a security checkpoint.

It can be difficult to impose blanket acoustical criteria, because lobbies take an infinite number of forms, and must respond to building occupancy, fire safety, pedestrian flow, plus cultural tastes and architectural aesthetics.

The requirements can fluidly fluctuate throughout design, and the acoustics need to keep pace. The following can inform the acoustical design:

-Areas under the balconies and stairs offer noise shielding for patrons to comfortably purchase beverages and tickets, check coats, and engage with ushers. 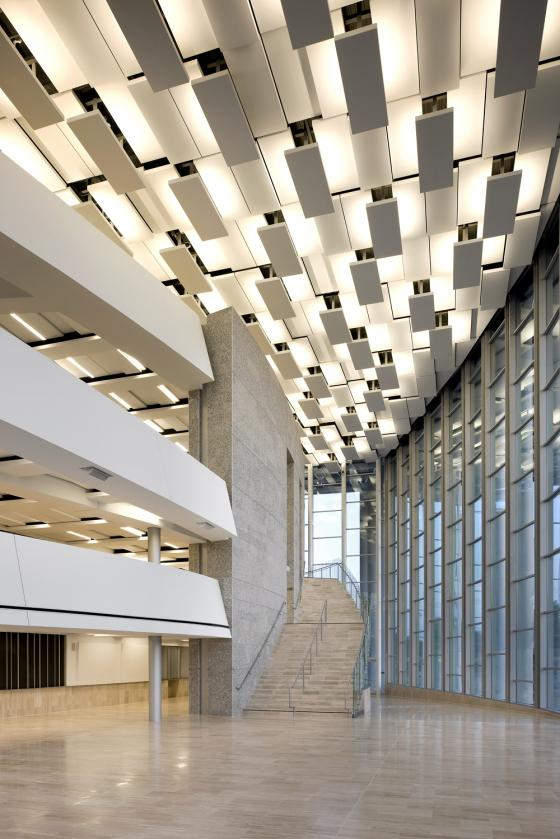 Figure 2 shows a five-story lobby in a large courthouse facility. The lobby is the main entrance for the facility, and connects the courthouse wing to the administrative wing via a series of stacked bridges.

The design called for walls to be glass and brick, with a hard floor and wood ceiling.  The resultant reverberation (time for sounds to decay to inaudibility) would be comparable to a cavernous cathedral and would impede clear communication.

Reverberation was reduced by providing ½” separations between individual wood planks at the ceiling, which allows sound to be absorbed in insulation above. The reverberation is still very long (about 2-1/2 seconds), but now people can communicate easily within about 6 feet of each other.  Beyond that distance, speech is garbled, which effectively promotes privacy from most other occupants.

The buildup of sound from various occupant activities would be too noisy for the security guards, so security personnel were relocated under the lowest bridge, shielding them from the general lobby noise and reverberation.

A successful design is sensitive to the goals of the facility, manages reverberation, collects activities into shielded areas, and prevents distracting noise from transmitting to noise-sensitive spaces. Careful balancing of surface shaping, finish treatments, and sound isolation can deliver a great lobby.