A sonic boom is the impulsive sound heard resulting from a vehicle flying faster than the speed of sound.  The origin of this impulsive sound is the localized shock structure close to the vehicle due to regions of compression and expansion of the air (Figure 1) which manifest as pressure disturbances.  The leading shock at the vehicle typically forms a cone that circumferentially spreads around its nose.  A commonly used formula that relates the interior cone angle to the supersonic vehicle’s Mach number is:  cone angle = asin(1/Mach).  Thus, the cone angle gets larger with decreasing supersonic Mach number and vice versa. 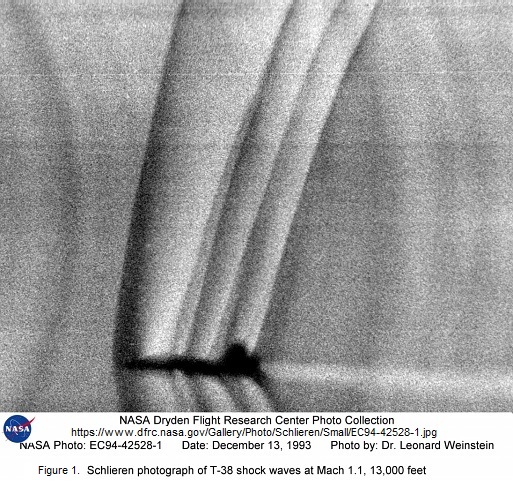 The sonic boom propagates along acoustic ray paths, and these paths can refract based on temperature gradients and wind speed gradients.  A fundamental premise is the ray path will always bend towards the slower speed of sound.  The initial ray direction is normal to the Mach cone, with some additional influence for its initial direction due to the presence of wind at the vehicle’s flight altitude.  A depiction of the Mach cone compared to the ray cone was presented by Plotkin (2008) shown in Figure 2.  The Mach cone exists at an instance in time, travelling with the supersonic vehicle, while the specific locations that comprise the Mach cone surface represent the pressure disturbances that propagate along ray paths.

Work presented here examines the shape of the Mach cone when propagated significantly large distances away from the vehicle in three-dimensional, realistic atmospheric conditions.  Also recognize the work here only depicts where the sonic boom could travel and not what its amplitude could be at the Earth’s surface.  Figure 3 shows that as the vehicle travels it is constantly generating new portions of the Mach cone, while the existing portions of the Mach cone all propagate at the local (effective) speed of sound.

Figure 4 – Computational example of a Mach cone for a vehicle traveling at Mach 1.15]

Figure 5 – Computational example of a Mach cone for a vehicle traveling at Mach 1.7]