It’s an understatement to say that rockets are loud. The high-speed exhaust rushing out of the nozzles mixes with the surrounding air, creating sound waves that can be heard over great distances. Even several miles away the sound waves can vibrate your whole body as the rocket lifts off and rides its pillar of fire into the cosmos.

If you watch a SpaceX Falcon 9 launch, you may be treated to another impressive experience: watching the rocket’s first-stage booster return to Earth in a “flyback” maneuver and land (see Figure 1). During flyback, the booster falls through the atmosphere at supersonic speeds, with increasing drag from an ever-thickening atmosphere gradually slowing its descent. Seconds before a would-be impact, a single rocket engine fires up again, landing legs deploy, and the rocket lands safely. Depending on your location, not only will you hear the engine firing during the landing, but it may also be preceded by a startling, rapid sequence of loud bangs. No, the rocket hasn’t exploded; this is the Falcon 9’s unique “triple sonic boom” caused by its unique geometry and flight profile while it was still high above you and falling at supersonic speeds.

Want to hear a Falcon 9 sonic boom created during flyback? Here are some examples on YouTube:

Considering how loud this “triple boom” is, let’s take a look at its pressure waveform in relation to the other launch and landing noise. Figure 2 shows a microphone recording of an entire Falcon 9 launch and landing at Vandenberg Space Force Base over a period of 10 minutes at a distance of 5 miles from the launch and landing pads. Also shown are half-second snippets of the waveform during each of three main phases. The launch noise, indicated in red, is littered with shocks (nearly instantaneous changes in pressure) while the landing noise, indicated in green, contains many shocks of smaller amplitude and lesser steepness. All three phases of noise contain shock-like content, but the sonic boom, indicated in blue, is much larger in amplitude. 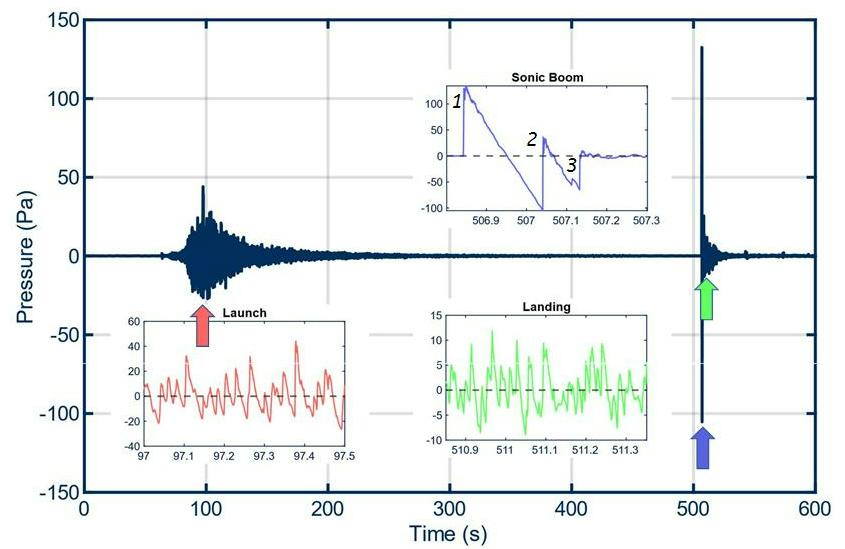 3SectionsForLayPaper.jpg, “Figure 2. A Falcon 9 launch recording, around 5 miles away from the launch and landing sites.”)

In order to determine the “sound exposure” of ground observers, we can use the Sound Exposure Level (SEL) metric over each section of the recording, as it accounts for both the amplitude and duration of the recording. The launch phase, calculated over 150 seconds, has an SEL of 127 dB (re 400 pPa2 s). However, the sonic boom – less than 1 second long – has an SEL of 124 dB. Although the boom’s duration is shorter than the launch, the amplitude is much greater, resulting in a total SEL similar to that of the entire launch noise. Lastly, the landing noise after the sonic boom (19 seconds) has an SEL of 112 dB.

This brief analysis shows that the landing noise (including the sonic boom) contributes a large amount of noise, similar to that of the launch phase, and needs to be considered when studying the effects of rocket launches on communities and environments.