More than a century ago, Nobel Prize laureate Paul Ehrlich formulated the idea of a “magic bullet”. This is a virtual drug that hits its target while bypassing healthy tissues. No field of medicine could benefit more from the development of a “magic bullet” than cancer chemotherapy, which is complicated by severe side effects. For decades, the prospects of developing “magic bullets” remained elusive. During the last decade, progress in nanomedicine has enabled tumor-targeted delivery of anticancer drugs via their encapsulation in tiny carriers called nanoparticles. Nanoparticle tumor targeting is based on the “Achilles’ heels” of cancerous tumors – their poorly organized and leaky microvasculature. Due to their size, nanoparticles are not capable to penetrate through a tight healthy tissue vasculature. In contrast, nanoparticles penetrate through a leaky tumor microvasculature thus providing for localized accumulation in tumor tissue.  After tumor accumulation of drug-loaded nanoparticles, a drug should be released from the carrier to allow penetration into a site of action (usually located in a cell cytoplasm or nucleus). A local release of an encapsulated drug may be triggered by tumor-directed ultrasound; application of ultrasound has additional benefits: ultrasound enhances nanoparticle penetration through blood vessel walls (extravasation) as well as drug uptake (internalization) by tumor cells.

For decades, ultrasound has been used only as an imaging modality; the development of microbubbles as ultrasound contrast agents in early 2000s has revolutionized imaging. Recently, microbubbles have attracted attention as drug carriers and enhancers of drug and gene delivery. Microbubbles could have been ideal carriers for the ultrasound-mediated delivery of anticancer drugs.  Unfortunately, their micron-scale size does not allow effective extravasation from the tumor microvasculature into tumor tissue. In Dr. Rapoport’s lab, this problem has been solved by the development of nanoscale microbubble precursors, namely drug-loaded nanodroplets that converted into microbubbles under the action of ultrasound[1-6]. Nanodroplets comprised a liquid core formed by a perfluorocarbon compound and a two-layered drug-containing polymeric shell (Figure 1.Schematic representation of a drug-loaded nanodroplet). An aqueous dispersion of nanodroplets is called nanoemulsion.

A suggested mechanism of therapeutic action of drug-loaded perfluorocarbon nanoemulsions is discussed below [3, 5, 6]. A nanoscale size of droplets (ca. 250 nm) provides for their extravasation into a tumor tissue while bypassing normal tissues, which is a basis of tumor targeting. Upon nanodroplet tumor accumulation, tumor-directed ultrasound triggers nanodroplet conversion into microbubbles, which in turn triggers release of a nanodroplet-encapsulated drug.  This is because in the process of the droplet-to-bubble conversion, particle volume increases about a hundred-fold, with a related decrease of a shell thickness. Microbubbles oscillate in the ultrasound field, resulting in a drug “ripping” off a thin microbubble shell (Figure 2. Schematic representation of the mechanism of drug release from perfluorocarbon nanodroplets triggered by ultrasound-induced droplet-to-bubble conversion; PFC – perfluorocarbon). In addition, oscillating microbubbles enhance internalization of released drug by tumor cells.

This tumor treatment modality has been tested in mice bearing breast, ovarian, or pancreatic cancerous tumors and has been proved very effective. Dramatic tumor regression and sometimes complete resolution was observed when optimal nanodroplet composition and ultrasound parameters were applied 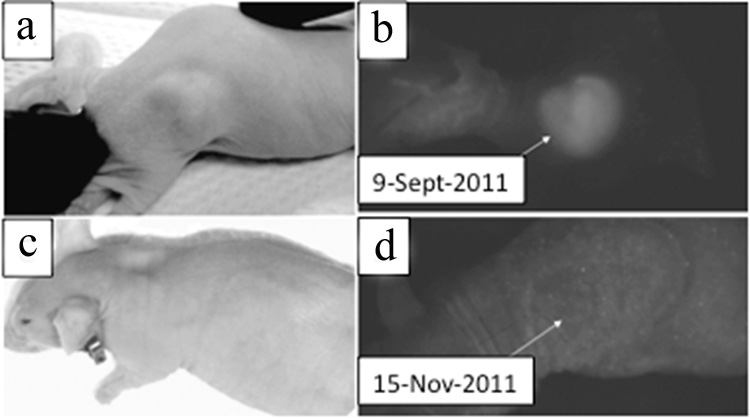 In the current presentation, the proposed mechanism of a therapeutic action of drug-loaded, ultrasound-activated perfluorocarbon nanoemulsions has been tested using intravital laser fluorescence microscopy performed in collaboration with Dr. Brian O’Neill (then with Houston Methodist Research Institute, Houston, Texas) [2]. Fluorescently labeled nanocarrier particles (or a fluorescently labeled drug) were systemically injected though the tail vein to anesthetized live mice bearing subcutaneously grown pancreatic tumors. Nanocarrier and drug arrival and extravasation in the region of interest (i.e. normal or tumor tissue) were quantitatively monitored. Various drug nanocarriers in the following size hierarchy were tested: individual polymeric molecules; tiny micelles formed by a self-assembly of these molecules; nanodroplets formed from micelles. The results obtained confirmed the mechanism discussed above. 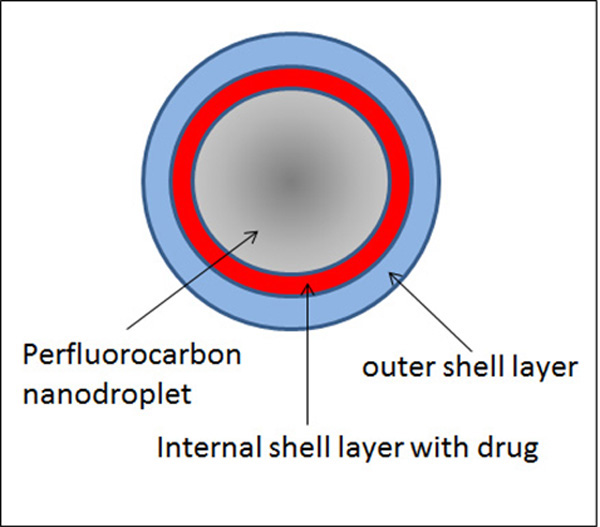 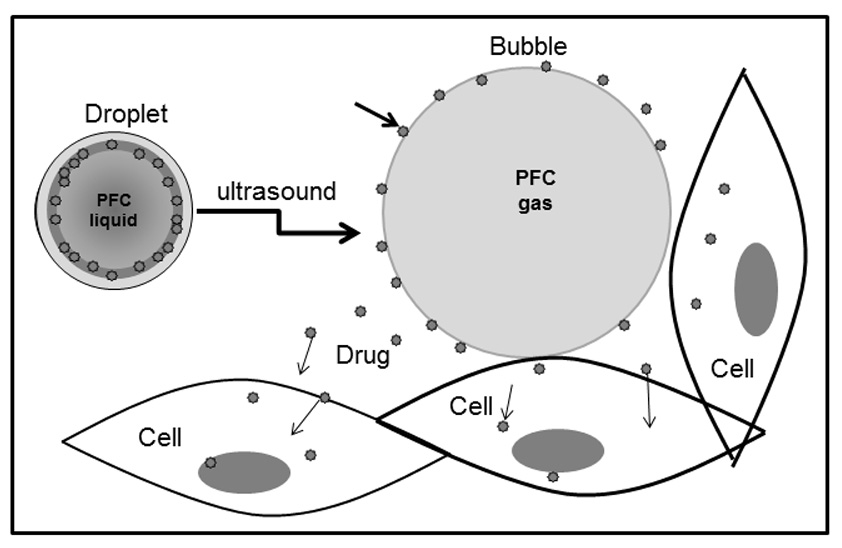