Popular version of paper 4aAB4 “Analysis of bats’ gaze and flight control based on the estimation of their echolocated points with time-domain acoustic simulation.”

Bats broadcast ultrasound and listen to the echoes to understand surrounding information. It is called echolocation. By analyzing those echoes, i.e., arrival time of echoes, bats can detect the position of objects, shape or texture [1-3]. Contrary to the way people use visual information, bats use the sound for sensing the world. How is the world different between the two by sensing? Because both senses are completely different, we cannot imagine how bats see the world.

To address this question, we simulated the echoes arriving at the bats during obstacle-avoiding flight based on the behavioral data so that we could investigate how the surrounding objects were described acoustically.

First, we arranged microphone arrays (24 microphones) and two high-speed cameras in an experimental flight chamber (Figure 1) [4]. The timing, positions and directions of emitted ultrasound as well as the flight paths were measured. A small telemetry-microphone was attached on the back of the bat so that the intensity of emitted ultrasound could be recorded accurately [5]. The bat was forced to follow a S-shaped flight pattern to avoid the obstacle acrylic boards.

Based on those behavioral data, we simulated propagation of sounds with the measured strength and direction emitted at the position of the bat in the experiment, and we could obtain echoes reaching both left and right ears from the obstacles. By using interaural time difference of echoes, we could acoustically identify the echolocated points in the space for all emissions (square plots in Fig.2). We also investigated how the bats show spatial and temporal changes in the echolocated points in the space as they became familiar with the space (top and bottom panels).

We analyzed changes in the echolocated points by using this acoustic simulation, corresponding to which part of objects the bats intended to gaze at. In a comparison between before and after the habituation in the same obstacle layout, there are differences in the wideness of echolocated points on the objects. By flying the same layout repeatedly, false detection of objects was reduced, and their echolocating fields became narrower.

It is natural for animals to pay their attention toward objects adequately and adapt both flight and sensing controls cooperatively as they became familiar with the space. These finding suggests that our approach in this paper, i.e., acoustic simulation based on behavioral experiment is one of effective ways to visualize how the object groups are acoustically structured and represented in the space for bats by echolocation during flight. We believe that it might serve a tip to the question; “What is it like to see as a bat?”

Figure 1 Diagram of bat flight experiment. Blue and red circles indicate microphones on the wall and the acrylic boards, respectively. Two high-speed video cameras are attached at the two corners of the room. Three acrylic boards are arranged to make bats follow S-shaped flight pattern to avoid the obstacles. 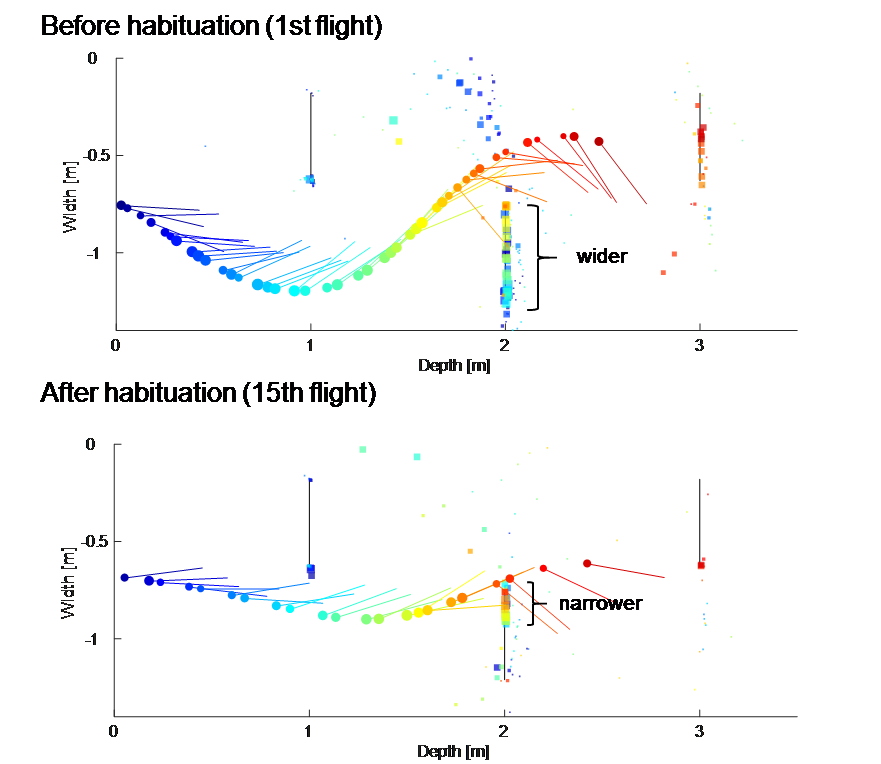 Figure 2 Comparison of echolocated points between before and after space habituation. The measured positions where the bat emitted the sound are shown with circle plots meanwhile the calculated echolocated points are shown with square plots. Color variation from blue to red for both circle and square plots corresponds to temporal sequence of the flight. Sizes of circle and square plots correspond to the strength of emissions and their echoes from the obstacles at the bat, respectively.