When we listen to speech, we draw on an enormous amount of experience to make inspired guesses as to what’s being said. But this very process of guesswork can lead us to perceive words and phrases that are not, in fact, being spoken. This paper reports a study in which two sequences of words arise simultaneously from different regions of space. The subject sits in front of two loudspeakers, with one to his left and the other to his right. A sequence is played consisting of two words, or a single word that is composed of two syllables, and these are repeated continuously. The same sequence is presented via both loudspeakers, but the sounds are offset in time, so that when one sound (word or syllable) is coming from the speaker on the left, the other sound is coming from the speaker on the right.

On listening to such a sequence, people often begin by hearing a jumble of meaningless sounds, but after a while distinct words and phrases emerge perceptually. Those that are heard as from the speaker on the left often appear different from those heard as from the speaker from the right. Later, different words and phrases emerge. In addition, people often hear a third stream of words or phrases, apparently coming from some location between the two speakers. Nonsense words, and musical, often rhythmic sounds, sometimes seem to be mixed in with the meaningful words.

People often report hearing speech in strange or “foreign” accents—presumably they are perceptually organizing the sounds into words and phrases that are meaningful to them, even though they seem to be distorted in consequence. To give an example of the variety of words that people hear when listening to these sounds, here are some reports from students in one class that I teach at UCSD, when presented continuously with the word nowhere.

Click here (MP3 file) to listen to a phantom word

It has been shown that, in listening to speech, most righthanders tend to focus more on the right side of space, which is represented primarily in the left hemisphere. However, non-righthanders are more varied in the direction of their focus. So we surmised that righthanders would perceive more phantom words and phrases as though coming from their right, and that non-righthanders would not show this difference in perceived location. To ensure that any effect of spatial location could not be attributed to a difference in loudspeaker characteristics, we divided our subject population into two handedness groups – righthanders and non-righthanders – and for each group half of the listeners were seated facing forward – that is, toward the speakers – and the other half were facing backward. The subjects were asked to write down each new word or phrase when they heard it, and to indicate whether it appeared to be coming from their left, from their right, or from somewhere between the speakers. 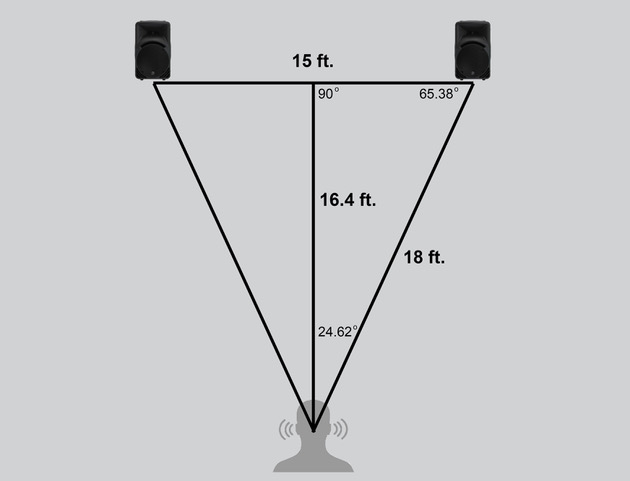 Setup in study exploring the number of phantom words heard as from the left, center, and right. 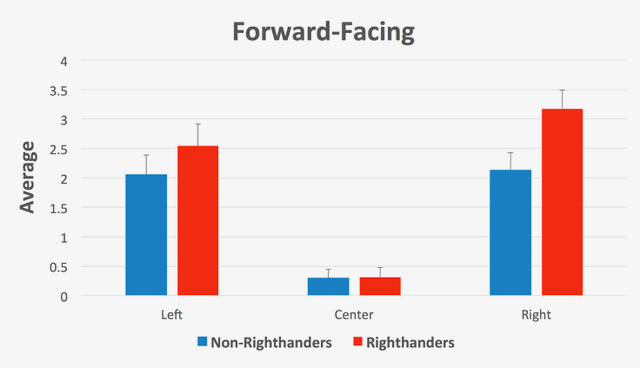 Average number of phantom words reported for each sequence, classified by the direction from which the phantom word appeared. The data from the forward-facing subjects are here presented. 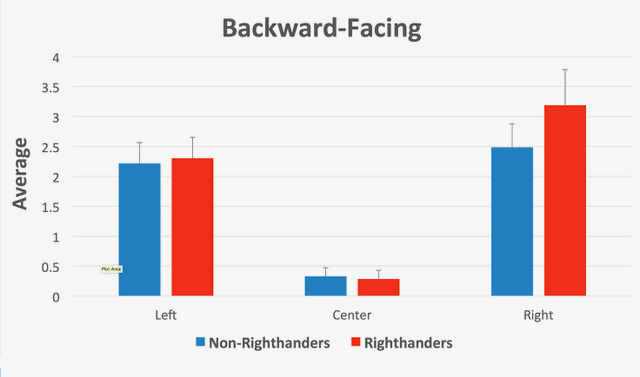 Average number of phantom words reported for each sequence, classified by the direction from which the phantom word appeared. The data from the backward-facing subjects are here presented.

So this study confirmed our surmise that righthanders would tend to hear more phantom words as from the right side of space, which for them is represented primarily in the left hemisphere. It further implies that, in righthanders, the left hemisphere is more involved in constructing meaning from ambiguous speech sounds.