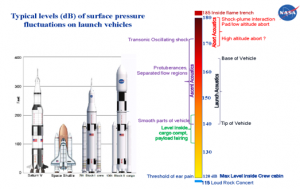 Figure 1. The Magnitude of Acoustic Loads on the Launch Vehicle 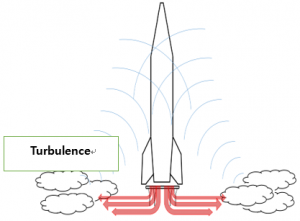 As the vehicle is launched (Figure. 2),it reaches volumes over 180dB, which corresponds to about 20,000 Pascals in pressure change. This pressure change is about 20% of atmospheric pressure, which is considered very large. Because of the pressure change during launching, communication equipment and antenna panel can incur damage, causing the malfunctioning of the fairing, the protective cone covering the satellite. In the engineering field, the load created by the launching noise is called acoustic load, and many studies are in progress related to acoustic load. 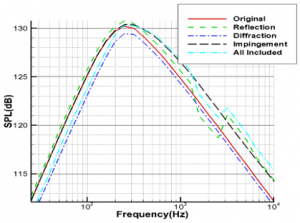 Figure 3 shows the results of our calculations, depicting the expected sound spectrum. We can consider various physics principles involved during a lift-off, such as sound reflection, diffraction and impingement that could affect the original empirical method results.
Meanwhile, our team used a statistical energy analysis method to predict the internal acoustic load caused by the predicted external acoustic load. This method is used often to predict internal noise environments. It is used to predict the internal noise of a launching vehicle as well as aircraft and automobile noise. Our research team used a program called, VA One SEA, for predicting these noise effects, shown as figure. 4. 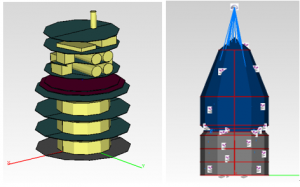 Figure 4. Modeling of the Payloads and Forcing of the External Acoustic Loads
After predicting internal acoustic load, we decreased the acoustic load to conduct an internal noise control study. A common way to do this is by sticking noise-reducing material to the structure. However, the extra weight from the noise-reducing material can cause decreased performance. To overcome this side effect, we also conducted a study about active noise control, which is in progress. Active noise control refers to reducing the noise by making antiphase waves of the sound for cancelling. Figure 5 shows the experimental results of applied SISO Noise Control, showing the reduction of noise is significant, especially for low frequencies.

Figure 5. Experimental Results of SISO Active Noise Control
Our research team applied the acoustic load prediction method and control method to the Korean launching vehicle, KSR-111. Through this application, we developed an improved empirical prediction method that is more accurate than previous methods, and we found usefulness of the noise control as we established the best algorithm for our experimental facilities and the active noise control area.