How Canaries Listen to Their Song – Adam R. Fishbein

How Canaries Listen to Their Song

The melodic, rolling songs of canaries have entertained humans for centuries. But for canaries, these songs play an important role in courtship. The song, produced exclusively by males, can last for minutes and consists of various syllables repeated in flexibly sequenced phrases.

Earlier behavioral observations have shown that females are especially attracted to so-called “sexy” syllables or “sexy” phrases. These are characterized by a fast tempo, wide-bandwidth (meaning that they extend from low to high pitch), and a two-note structure. Researchers have argued that females have evolved to prefer these syllables because they are difficult to produce and thus provide an honest signal of the male’s quality [1][2]. That is, sexy syllables indicate a strong, healthy male with good genes.

and spectrogram of “sexy” phrase (right). 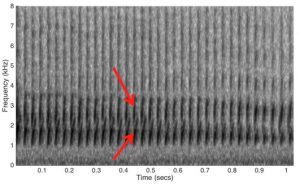 We explored how canaries in a non-breeding state (i.e. short days) listen to their song by testing their auditory perception using the equivalent of a human hearing test. Since the birds can’t tell us “yes” or “no” when asked if two sounds are different, we train them to listen to a repeating sound and peck a key when the sound changes. If they respond correctly, this tells us they can hear the difference between the sounds and they are then rewarded with brief access to food. 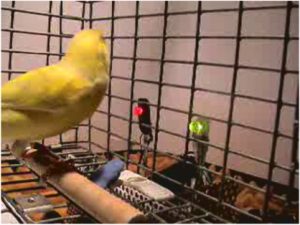 Some of the questions we posed are: Do sexy phrases sound different to canaries than other phrases? Do they listen more to the fine details of every syllable or to the overall flow of the song? Are females more sensitive to “sexy” qualities than males? Do other birds hear canary song differently than canaries?

In one experiment, we asked canaries to distinguish between eight different song phrases: four “sexy” ones and four “non-sexy” ones. We analyzed the birds’ responses and created a “perceptual map” that visually represents how distinct the phrases sound to the canaries.

Our results show that canaries perceive a bird’s sexy phrases as more similar to each other than other phrases, confirming that canaries find these sexy syllable vocalizations particularly salient. 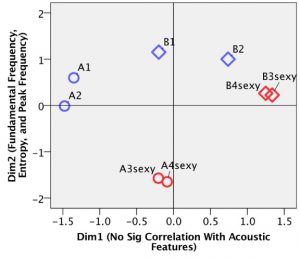 Other experiments in this study provided further evidence that sexy song syllables sound distinctive to canaries. Canaries could hear synthesized reversals of sexy syllables, but performed better at reversals of non-sexy ones. They were also better at hearing increases in the tempo of sexy syllables than decreases in tempo. These results suggested that canaries may be attuned to perceiving the fast tempo and coordinated notes of the sexy syllables. Importantly, these findings were the case for both female and male canaries, perhaps because male canaries need to assess competitors and maintain their own song, just as females need to find the highest quality mate.

Canaries are not exceptional in being able to hear the fine details of their song. Other species tested with these song manipulations are similarly sensitive to small temporal differences between notes in sexy syllables.

Taken together, these results suggest that canaries listen to chunk by chunk, phrase by phrase changes in their song, keying in to details about sexiness when those particular syllables occur. In the future, it will be interesting to compare these perceptual results from canaries in a non-breeding state to canaries that are on long days, with elevated hormone levels, preparing to breed.

In a way, canaries seem to listen to song like we listen to an orchestral symphony, hearing the melody and rhythm of the whole piece, integrating the contributions of each instrument, and not zooming in on the performance of a single instrument except during an especially impressive solo.