Music has the potential to evoke powerful emotions, both positive and negative. When listening to an enjoyable piece or song, an individual can experience intense, pleasurable “chills” that signify a surge of dopamine and activations in certain regions in the brain, such as the ventral striatum1 (see Fig. 1). Conversely, regions of the brain associated with negative emotions, for instance the parahippocampal gyrus, can activate during the presentation of music without harmony or a distinct rhythmic pattern2. Prior research has shown that the nucleus accumbens (NAcc) in the ventral striatum specifically activates during reward processing3, even if the stimulus does not present a tangible benefit, such as that from food, sex, or drugs4-6.

Figure 1: A cross-section of the human brain detailing (left) the ventral striatum, which houses the nucleus accumbens (NAcc), and (right) the parahippocampal gyrus.

Even subtle changes in acoustic (sound) stimuli can affect experiences positively or negatively. In terms of concert hall design, the acoustical characteristics of a room, such as reverberance, the lingering of sound in the space, contribute significantly to an individual’s perception of music, and in turn influences room acoustics preference7-8. As with the case for music, different regions of the brain should activate depending on how pleasing the stimulus is to the listener. For instance, a reverberant stimulus may evoke a positive emotional response in listeners that appreciate reverberant rooms (e.g. a concert hall), while negative emotional regions may be activated for those that prefer drier rooms (e.g. a conference room). The identification of which regions in the brain are activated due to changes in reverberance will provide insight for future research to investigate other acoustic attributes that contribute to preference, such as the sense of envelopment.

The acoustic stimuli presented to the participants ranged in levels of perceived reverberance from anechoic to very reverberant conditions, e.g. a large cathedral. Example stimuli, which are similar to those used in the study, can be heard using the links below. As you listen to the excerpts, pay attention to how the characteristics of the sound changes even though the classical piece remains the same.

The set of stimuli with varying levels of reverberation were created by convolving an anechoic recording of a classical excerpt with a synthesized impulse response (IR) that represented the IR of a concert hall. The synthesized IR was double-sloped (see Fig. 2a) such that early part of the response was consistent between the different conditions, but the late reverberation differed. As shown in Fig. 2b the late parts of the IR vary greatly, while the first 100 milliseconds overlap. The reverberation times (RT) of the stimuli varied from 0 to 5.33 seconds

Figure 2: Impulse responses for the four synthesized conditions: (a) the total impulse response, (b) Time scale from 0 to 1 seconds to highlight the early part of the IR.

Functional magnetic resonance imaging (fMRI) was used to locate the regions of the brain that were activated by the stimuli. In order to find these regions, the images obtained due to the musical stimuli are each compared with the activations resulting due to control stimuli, which for this study were noise stimuli. Examples of control stimuli that are matched to the musical ones provided earlier can be heard using the links below. The noise stimuli were matched to have the same rhythm and frequency content for each reverberant condition.

A total of 10 stimuli were used in the experiment: five acoustic stimuli and five corresponding noise stimuli, and each stimulus was presented eight times. Each stimulus presentation lasted for 16 seconds. After each presentation, the participant was given 10 seconds to rate the stimulus in terms of preference on a five-point scale, where -2 was equal to “Strongly Dislike,” 0 was “Neither Like Nor Dislike,” and +2 was “Strongly Like.”

The following data represent the results of one participant averaged over the total number of repeated stimuli presentations. The average preference ratings for the five musical stimuli are shown in Fig. 3. While the majority of the ratings were not statistically different, the general trend is that the preference ratings were higher for the stimuli with the 1-2 second RTs and lowest for the excessively long RT of 5.33 seconds. These results are consistent with a pilot study that was run with seven subjects, and in particular, the stimulus with the 1.44 second RT was found to have the highest preference rating. 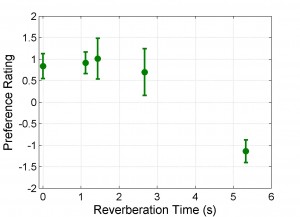 The fMRI results were found to be in agreement for the highest rated stimulus with an RT of 1.44 seconds. Brain activations were found in regions shown to be associated with positive emotions and reward processing: the right ventral striatum (p<0.001) (Fig. 4a) and the left and right amygdala (p<0.001) (Fig. 4b). No significant activation were found in regions shown to be associated with negative emotions for this stimulus, which supports the original hypothesis. In contrast, a preliminary analysis of a second participant’s results possibly indicates that activations occurred in areas linked to negative emotions for the lowest-rated stimulus, which is the one with the longest reverberation time of 5.33 seconds. 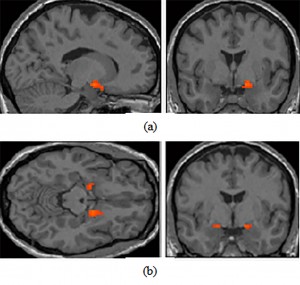 A first-level analysis of one participant exhibited promising results that support the hypothesis, which is that a stimulus with a high preference rating will lead to activation of regions of the brain associated with reward (in this case, the ventral striatum and the amygdala). Further study of additional participants will aid in the identification of the neural mechanism engaged in the emotional response to stimuli of varying reverberance.