Lips, teeth, and cheeks are the key ingredients of every great smile.  For a speech therapist, however, they get in the way of seeing how the tongue moves during speech.  This creates a challenge for treating speech sound errors in the clinic.  Carefully coordinated movements of the tongue shape sound into speech.  If you have ever heard someone say what sounds like a “w” for the “r” sound or make the “s” sound with a lisp, you have heard what can happen when the tongue does not move toward the right shape to create the sounds. When these errors persist into adolescence and adulthood, there can be major social consequences.

Preschool children and toddlers often make speech errors with the tongue that can make it difficult for them to be understood.  Sounds like “k,” “s,” and “r” commonly have errors because saying them accurately requires high-level coordination of the muscles in the tongue.  In fact, 15% of children, aged 4-6 years, have some delay or error in speech sound production, without any known cause.

Traditional speech therapy for these errors can include games, drills, and some work to describe or show how the sound should be produced. Many times, these errors can be resolved with less than a year of treatment.  Sometimes, even with strong work in speech therapy, the speech errors continue into adolescence and adulthood.  In these cases, being able to see how the tongue is moving and to provide a visualization of how it should move would be especially useful.

Opti-Speech is a technology that provides this visualization in the speech therapy room.  With it, the patient’s tongue movement is displayed in real-time as he or she talks.  The speech therapist can see how the tongue is moving and provide target shapes that help the client produce speech sounds correctly.  It was developed by a team that included speech therapists, computer scientists, animators, and biomedical engineers in collaboration with a tech company, Vulintus, using hardware created by Northern Digital, Incorporated.

Tiny sensors are placed on the tongue and their positions are tracked in an electromagnetic field.  The positions of the sensors are generated as a 3D animated tongue on a display screen.  Using the animation, the speech therapist can identify how the target sound is produced in error, which is not possible without this visualization.

In 2008 in Dallas, Texas, I started working with a talented team that included an electrical engineer, a computer scientist, an animator, and two other speech therapists to create the Opti-Speech therapy technology. We imagined software that could show an animated version of a tongue, driven in real-time by the motion of the client’s tongue, that could be used to “show” clients how to produce the sounds better.  Similar technology is used to improve golf swings — by showing the aspiring golfers an image of their swing superimposed on an ideal swing, improvements come more rapidly.

Why couldn’t this same concept be applied to speech, we wondered. With this in mind, the Opti-Speech project began.  The engineers and animators worked on the software, the speech therapists tested early versions, and in my lab at Case Western Reserve University, we set out to better understand what the targets for speech sounds might be. 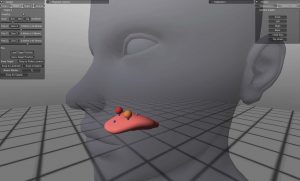 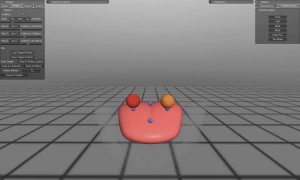 Figure 1: The motion of 5 sensors glued to the tongue animate the movement of the avatar tongue in real-time. Credit: Vick/CHSC

Just eight years later, I am proud that Cleveland Hearing and Speech Center was included in an NIH-funded phase II clinical trial of Opti-Speech.  The technology uses the captured motion of sensors on the tongue to animate a real-time 3-D avatar tongue (see Figure 1).  The speech therapist can set spherical targets to “show” the client how to shape the tongue for particular speech sounds. For those who have not had success with traditional speech therapy, the Opti-Speech clinical trial may be a great alternative.

It has been almost 18 months since CHSC started the Opti-Speech trial. Rebecca Mental, a CHSC staff speech-language pathologist and doctoral student at CWRU, designed the treatment sessions and is running them. To date, she has completed the treatment with eleven participants who range in age from 8 to 22 years.  Each and every one of these individuals has put in many hours across 13 sessions to help us understand if Opti-Speech will be a treatment that will be beneficial to our clients.

With these cases behind us, I am pleased to report that I believe we have a powerful new approach for treating those speech sound errors the most resistant to improvement.  All of the Opti-Speech participants were previously enrolled in speech therapy without resolving their speech errors. Many of these individuals came to us frustrated, expecting to encounter yet another unsuccessful run in therapy.

With Opti-Speech, most of these participants experienced a transformation in how they make speech sounds.  The key to the success of Opti-Speech is giving the client an additional “sense” for producing speech.  In addition to feeling the tongue move and hearing the sound, Opti-Speech clients can “see” the movements of the tongue and know, right away, if they have produced the sound correctly.

The Opti-Speech story is best told through the experience of one of our first participants.  Nancy, as I will call her, was 22-year-old and had been in speech therapy throughout most of her early school years to work on the “r” sound.  It was her junior year of high school when Nancy first became aware that her peers were making fun of her speech. As this continued, she started to notice that teachers had a difficult time understanding her.  Before long, she started to question her own competence and abilities.  Nancy is a server at a local restaurant.  Her boyfriend said she frequently returned home from work in tears.  Nancy says, “When I have to say an ‘r’ word, I try to mumble it so that people won’t hear the error, but then they ask me to repeat myself which makes me feel even more embarrassed.”  Frustrated, Nancy again enrolled in speech therapy, trying a few different clinics, but she did not have any success changing her “r” sound. Her boyfriend began researching options on the internet and found out about the Opti-Speech clinical trial at CHSC. Nancy was soon enrolled in the trial.  As her boyfriend said, “I feel like we wasted so much time trying other things and then we came here and, BAM, 10 sessions and she can say “r” like anyone else!”  He says he could hear a difference in Nancy’s speech after two or three sessions. Nancy has remarked that the change has made her job so much easier. “I can actually tell people that I am a server now. I used to avoid it because of the “r” sound.  And at work, I can say ‘rare’ and ‘margarita’ and customers can understand me!”

It has been three months since Nancy “graduated” from Opti-Speech treatment and everything is going great for her.  She is enrolled in classes at community college and working as a server at a high-end restaurant.  While she is incredibly proud of her new speech, she is, understandably, self-conscious about how her speech used to sound.  While listening to a recording of her speech before Opti-Speech, tears fell from her eyes. Looking back on the past gave her such an incredible sense of how far she’s come.  I am exhilarated to have met and talked with Nancy.  It made me realize the power of imagination and collaboration for solving some of the greatest challenges we encounter in the clinic.

Every year at Cleveland Hearing and Speech Center, we see countless clients who have speech production errors that Opti-Speech may improve. We have a strong affiliation with researchers at CWRU and we have a talented team of speech therapists who can help to run the trial. In other words, CHSC is unique in the world in its ability to test new technologies for speech, hearing, and deafness. This is why CHSC is the only site in the world currently running the Opti-Speech clinical trial. Almost a century of collaboration, community support, and philanthropy has helped to create the perfect environment for bringing the most cutting-edge speech therapy to our region.