“Sound pollution decreases the chances of love for oyster toadfish”

Despite the famous marine explorer Jacques Cousteau describing the underwater environment as a “silent world”, scientists have discovered sound plays a key role in the lives of many aquatic species. For example, many fishes vocalize to deter predators and attract mates. The oyster toadfish, Opsanus tau, has a rich vocal repertoire, producing a variety of calls with fast contracting muscles along its swimbladder. At the beginning of the mating season, in early summer, male toadfish establish a nest and produce calls termed “boatwhistles” to both announce their territory to competing males and attract females to lay eggs in their nest. However, despite toadfish being studied since 1888, surprisingly little is known about the what part of the song attracts the female, what is the range of the male’s call and the potential effects of sound produced by anthropogenic activity within coastal waters where the toadfish reside. 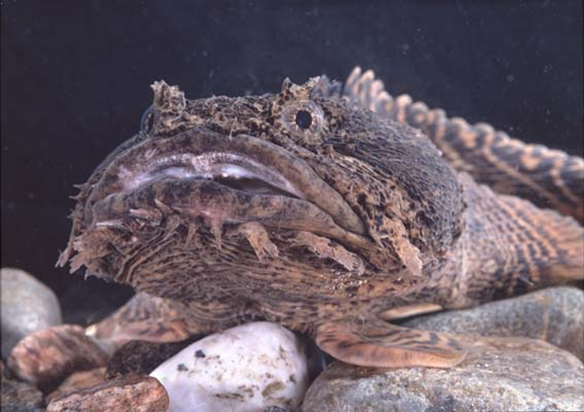 Therefore, in 2015 the Mensinger lab began conducting passive acoustic monitoring on a resident population of oyster toadfish located in Eel Pond, a small saltwater harbour, adjacent to the Marine Biological Laboratory (MBL) in Woods Hole, Massachusetts. Male toadfish produce unique acoustic signatures in their boatwhistles and the relatively small number of toadfish in the area (< 15) provided an opportunity to study the effect of anthropogenic sound on individual male calling, as males remain in their nests for the entire mating season. Additionally, the movements of large motorized watercraft are restricted by a drawbridge, allowing a natural control, or quiet time, at night when no man-made sound was present. The lab suspended four hydrophones from the dock to record boatwhistles and mathematically compute individual fish locations.

Putland Figure 2: Toadfish boatwhistles are shown during an 8 second calling window. Three distinct individuals were identified based on waveform shape, spectrogram components and amplitude with one highlight in the box. From Putland et al. 2018. 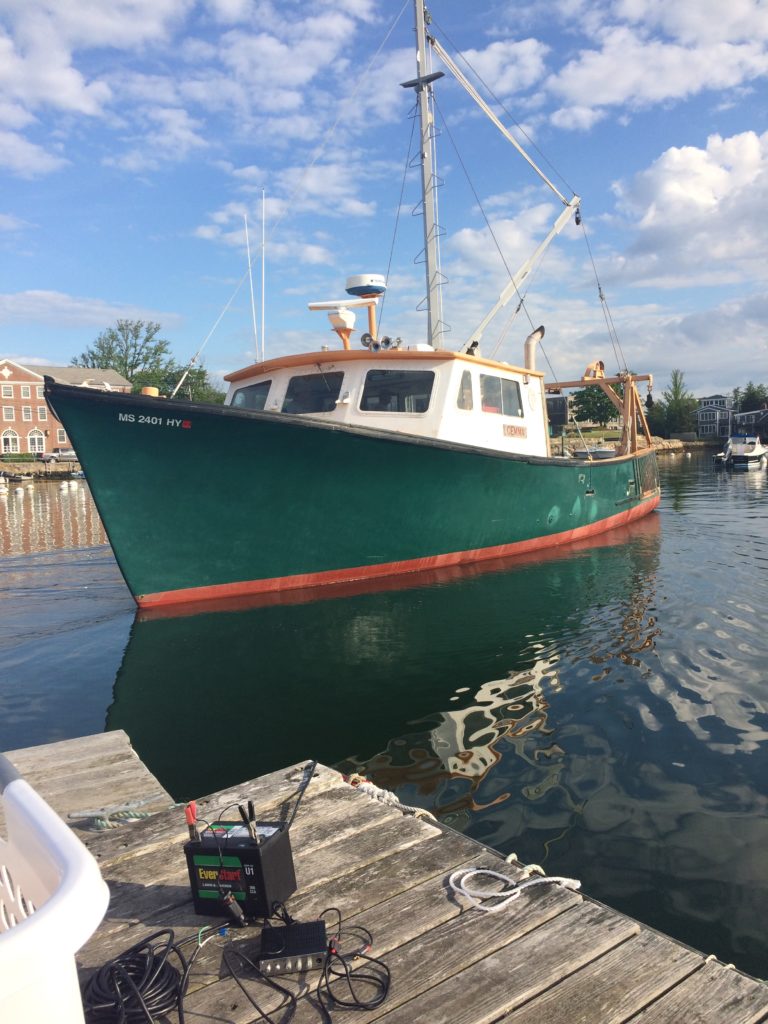 Putland Figure 3: Photograph of equipment being deployed at the end of the dock with the research vessel passing by. Taken by Rosalyn Putland
Male toadfish called significantly less following exposure to even brief vessel sound, (5 to 10 minutes) with the motor sound swamping the sound frequency (50 – 500 Hz) and “loudness” of toadfish boatwhistles. Unique sound characteristics of the boatwhistle (pitch, volume, duration) are thought to be used by females to pick the biggest and best mates. For example, larger fish tend to produce lower frequency, louder and longer boatwhistles than smaller individuals. However, exposure to vessel sound could potentially mask the mating call and leave the females swimming aimlessly.

Determining when, where and how often fish, such as the oyster toadfish, are producing sound allows acoustically sensitive times and areas to be prioritized during management strategy. For example, vessel speed restrictions or restricted boat traffic could be enforced to reduce sound levels during critical spawning periods. The male fish is considered by many to be unattractive and does not need man made sound interfering with his love song.