What the f***? Making sense of expletives in The Wire
Erica Gold – e.gold@hud.ac.uk
Dan McIntyre – d.mcintyre@hud.ac.uk

Popular version of paper 3pSC87, “ What the f***? Making sense of expletives in ‘The Wire'” 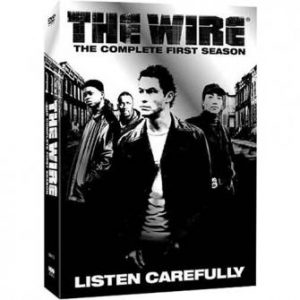 In Season one of HBO’s acclaimed crime drama The Wire, Detectives Jimmy McNulty and ‘Bunk’ Moreland are investigating old homicide cases, including the murder of a young woman shot dead in her apartment. McNulty and Bunk visit the scene of the crime to try and figure out exactly how the woman was killed. What makes the scene unusual dramatically is that, engrossed in their investigation, the two detectives communicate with each other using only the word, “fuck” and its variants (e.g. motherfucker, fuckity fuck, etc.). Somehow, using only this vocabulary, McNulty and Bunk are able to communicate in a meaningful way. The scene is absorbing, engaging and even funny, and it leads to a fascinating question for linguists: how is the viewer able to understand what McNulty and Bunk mean when they communicate using such a restricted set of words? 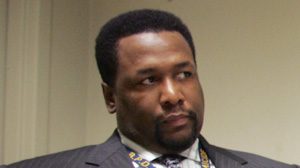 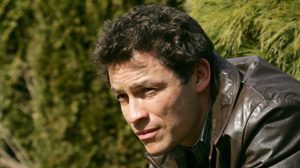 To investigate this, we first looked at what other linguists have discovered about the word fuck. What is clear is that it’s a hugely versatile word that can be used to express a range of attitudes and emotions. On the basis of this research, we came up with a classification scheme which we then used to categorise all the variants of fuck in the scene. Some seemed to convey disbelief and some were used as insults. Some indicated surprise or realization while others functioned to intensify the following word. And some were idiomatic set phrases (e.g. Fuckin’ A!). Our next step was to see whether there was anything in the acoustic properties of the characters’ speech that would allow us to explain why we interpreted the fucks in the way that we did.

The entire conversation between Bunk and McNulty lasts around three minutes and contains a total of 37 fuck productions (i.e. variations of fuck). Due to the variation in the fucks produced, the one clear and consistent segment for each word was the <u> in fuck. Consequently, this became the focus of our study. The <u> in fuck is the same sound you find in the word strut or duck and is represented as /ᴧ/ in the International Phonetic Alphabet. When analysing vowel sounds, such as <u>, we can look at a number of aspects of its production.

In this study, we looked at the quality of the vowel by measuring the first three formants. In phonetics, the term formant refers to acoustic resonances of sound in the vocal tract. The first two formants can tell us if the production sounds more like, “fuck” rather than, “feck” or “fack,” and the third formant gives us information about the voice quality. We also looked at the duration of the <u> being produced, “fuuuuuck” versus “ fuck.”

After measuring each instance, we ran statistical tests to see if there was any relationship between the way in which it was said, and how we categorised its range of meanings. Our results showed that if we accounted for the differences in the vocal tract shapes of the actors playing Bunk and McNulty, the quality of the vowels are relatively consistent. That is, we get a lot of <u> sounds, rather than “eh,” “oo” or “ih.”

The productions of fucks that were associated with the category of realization were found to be very similar to those associated with disbelief. However, disbelief and realization did contrast with those that were used as insults, idiomatic phrases, or functional words. Therefore, it may be more appropriate to classify the meaning into fewer categories – those that signify disbelief or realization, and those that are idiomatic, insults, or functional. It is important to remember, however, that the latter group of three meanings are represented by fewer examples in the scene. Our initial results show that these two broad groups may be distinguished through the length of the vowel – short <u> is more associated with an insult, function, or idiomatic use rather than disbelief or surprise (for which the vowel tends to be longer). In the future, we would also like to analyse the intonation of the productions. See if you can hear the difference between these samples:

Example 2: general expletive which falls under the functional/idiomatic/insult category

Our results shed new light on what for linguists is an old problem: how do we make sense of what people say when speakers so very rarely say exactly what they mean? Experts in pragmatics (the study of how meaning is affected by context) have suggested that we infer meaning when people break conversational norms. In the example from The Wire, it’s clear that the characters are breaking normal communicative conventions. But pragmatic methods of analysis don’t get us very far in explaining how we are able to infer such a range of meaning from such limited vocabulary. Our results confirm that the answer to this question is that meaning is not just conveyed at the lexical and pragmatic level, but at the phonetic level too. It’s not just what we say that’s important, it’s how we fucking say it!

*all photos are from HBO.com

Effects of language and music experience on speech perception

Speech perception involves constant interplay between top-down and bottom-up processing. For example, to process phonemes (e.g. ‘b’ from ‘p’), the listener must accurately process the acoustical information in the speech signals (i.e. bottom-up strategy) and assign these sounds efficiently to a category (i.e. top-down strategy). Listeners’ performance in speech perception tasks is influenced by their experience in either processing strategy. Here, we use lexical tone processing as a window to examine how extensive experience in both strategies influence speech perception.

Lexical tones are contrastive pitch contour patterns at the word level. That is, a small difference in the pitch contour can result in different word meaning. Native speakers of a tonal language thus have extensive experience in using the top-down strategy to assign highly variable pitch contours into lexical tone categories. This top-down influence is reflected by the reduced sensitivity to acoustic differences within a phonemic category compared to across categories (Halle, Chang, & Best, 2004). On the other hand, individuals with extensive music training early in life exhibit enhanced sensitivities to pitch differences not only in music, but also in speech, reflecting stronger bottom-up influence. Such bottom-up influence is reflected by the enhanced sensitivity in detecting differences between lexical tones when the listeners are non-tonal language speakers (Wong, Skoe, Russo, Dees, & Kraus, 2007).
How does extensive experience in both strategies influence lexical tone processing? To address this question, native Mandarin speakers with extensive music training (N=17) completed a music pitch discrimination task and a lexical tone discrimination task. We compared their performance with individuals with extensive experience in only one of the processing strategies (i.e. Mandarin nonmusicians (N=20) and English musicians (N=20), data from Zhao & Kuhl (2015)). 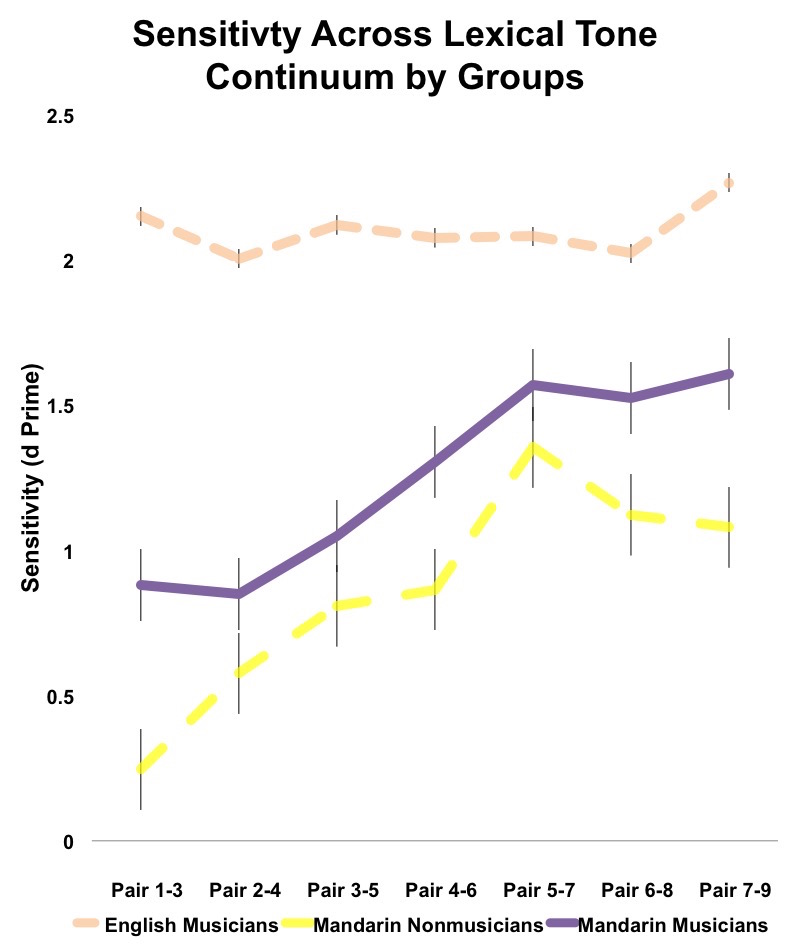 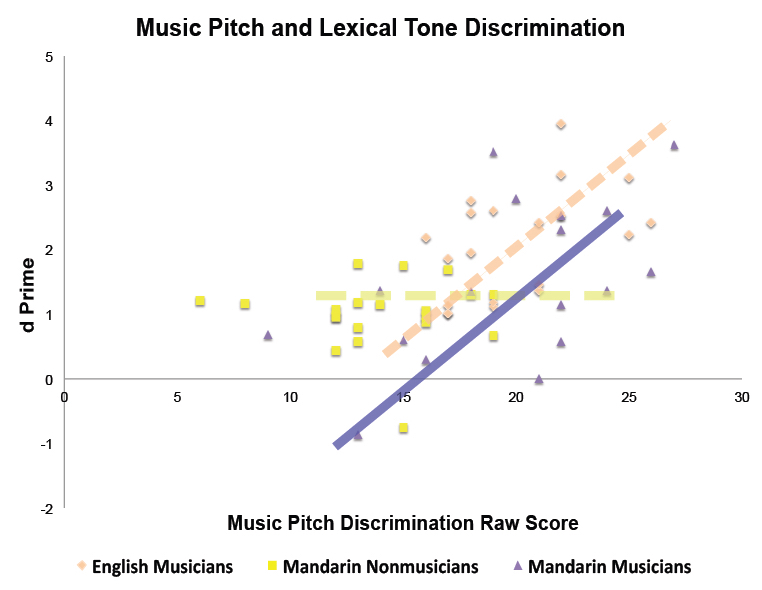 Presentation #1pSC2 “Effect of age, hearing loss, and linguistic complexity on listening effort as mentioned by working memory span” by Margaret K. Pichora-Fuller and Sherri L. Smith will be take place on Monday, May 18, 2015, at 1:55 PM in Kings 4 at the Wyndham Grand Pittsburgh Downtown Hotel. The abstract can be found by searching for the presentation number here:
https://asa2015spring.abstractcentral.com/planner.jsp