Melody in my head, melody in my genes?
Acoustic similarity, individuality and genetic relatedness in the indris of Eastern Madagascar

Human hearing ablities are exceptional at identifying the voices of friends and relatives [1]. The potential for this identification lies in the acoustic structures of our words, which not only convey verbal information (the meaning of our words) but also non-verbal cues (such as sex and identity of the speakers).

In animal communication, the recognizing a member of the same species can also be important. Birds and mammals may adjust their signals that function for neighbor recognition, and the discrimination between a known neighbor and a stranger would result in strikingly different responses in term of territorial defense [2].

Indris (Indri indri) are the only lemurs that produce group songs and among the few primate species that communicate using articulated singing displays. The most distinctive portions of the indris’ song are called descending phrases, consisting of between two and five units or notes. We recorded 21 groups of indris in the Eastern rainforests of Madagascar from 2005 to 2015. In each recording, we identified individuals using natural markings. We noticed that group encounters were rare, and hypothesized that song might play a role in providing members of the same species with information about the sex and identity of an individual singer and the emitting group. 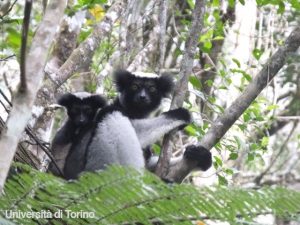 We found we could effectively discriminate between the descending phrases of an individual indris, showing they have the potential for advertising about sex and individual identity. This strengthened the hypothesis that song may play a role in processes like kinship and mate recognition. Finding that there is was degree of group specificity in the song also supports the idea that neighbor-stranger recognition is also important in the indris and that the song may function announcing territorial occupation and spacing. 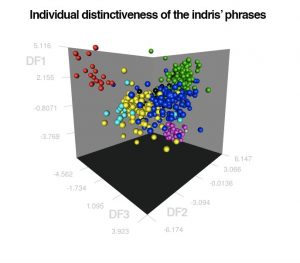 For the first time, we found evidence that the similarity of a primate vocal display changes within a population in a way that is strongly associated with kin. When examining differences between sexes we found that male offspring showed phrases that were more similar to their fathers, while daughters did not show similarity with any of their parents.

The potential for kin detection may play a vital role in determining relationships within a population, regulating dispersal, and avoiding inbreeding. Singing displays may advertise kin to signal against potential mating, information that females, and to a lesser degree males, can use when forming a new group. Unfortunately, we still do not know whether indris can perceptually decode this information or how they use it in their everyday life. But work like this sets the basis for understanding primates’ mating and social systems and lays the foundation for better conservation methods.

Figure 1. A female indri with offspring in the Maromizaha Forest, Madagascar. Maromizaha is a New Protected Area located in the Region Alaotra-Mangoro, east of Madagascar. It is managed by GERP (Primate Studies and Research Group). At least 13 species of lemurs have been observed in the area.

Figure 2. Spectrograms of an indri song showing a typical sequence of different units. In the enlarged area, the pitch contour in red shows a typical “descending phrase” of 4 units. The indris also emit phrases of 2, 3 and more rarely 5 or 6 units.

Figure 3. A 3d-plot of the dimensions (DF1, DF2, DF3) generated from a Discriminant model that successfully assigned descending phrases of four units (DP4) to the emitter. Colours denote individuals. The descending phrases of two (DP2) and three units (DP3) also showed a percentage of correct classification rate significantly above chance.