Any sound, whether the warble of an exotic bird or the noise of clucky machinery, what scientists percieve is a complex mixture of many primitive sound waves — the so-called pure tones, which are simply vibrations of certain distinct frequencies. So, is it possible, we wondered, to break down such an acoustic compound into its constituents and separate one of those pure tones from the rest?

It can be achieved using any of the signal processing techniques, however, a simple mechanistic solution also exists in the form of a passive system. That is to say, one that doesn’t have to be turned on to operate.

Here we demonstrate such a system: A linear, periodic arrangement of metallic perforated cylindrical shells in air (see Fig. 1), which serves as a redirecting antenna and a splitter for sound within an audible range. 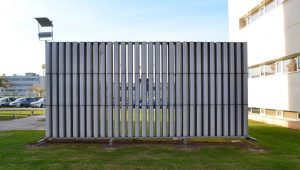 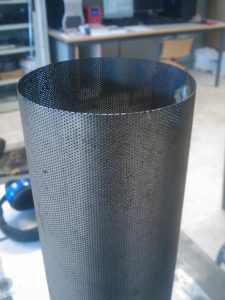 Each shell in the chain (see Fig. 2) is a weak scatterer, meaningt the sound wave would pass through it virtually undistorted, and strong redirection of an incoming signal might occur only if the chain is sufficiently long. When the number of shells in the chain is large enough, e.g. several dozens, each shell participates in a collective oscillatory motion, with each one of them transferring its vibration to its neighbor via the environment. Such a self-consistent wave is referred to as an eigenmode of our system, and it is best thought of as collective oscillations of air localized in the vicinity of the shells’ surfaces.

Now, there are two substantial concepts regarding the wave motion that deserve careful clarification. When describing an acoustic wave, we can look at how and where the regions of maximum (or minimum) pressure move through the medium (air in this case), and combine the information with that of the pace and direction of their motion into a single characteristic — called the phase velocity of the wave.

The idea of exploiting the fundamental eigenmodes of our system with either normal or anomalous dispersion is what enables the chain of perforated shells to redirect and focus sound. Namely, an acoustic signal that impinges on the chain can trigger the collective vibration of the shells – the eigenmode – and, thus, launch a wave running along the chain.

Of course, most of the sound would pass through the chain, but nevertheless the amount of energy that is redirected along the chain in the form of an eigenmode is quite noticeable. The eigenmode excitation only occurs if the phase velocity of the eigenmode matches that of the incoming signal, and for a specific incident angle, the matching condition supports several frequencies within the audible range.

What is crucial here is that the dispersion of the chain’s eigenmodes on those frequencies is alternating between normal and anomalous, which means that varying only the frequency of the incident acoustic wave (with everything else remaining unchanged) one can virtually switch the direction of the eigenmode propagation along the chain.

Animation 1 – An acoustic wave of frequency 2625 Hz is incident on the chain of perforated shells at the angle of 10o. The excited eigenmode having anomalous dispersion propagates down the chain. Credit: Bozhko

Animation 2 – Same as in animation 1, but the frequency is 3715 Hz, with the excited eigenmode having normal dispersion now. The redirected sound then propagates upwards along the chain. Credit: Bozhko

Animations 1 and 2 illustrate such intriguing behavior of the chain of perforated shells. In one case, the eigenmode that is excited has normal dispersion and carries energy upwards along the chain. In the other case, the dispersion is anomalous and the eigenmode travels downwards. The 10° incidence angle of the sound in both cases is the same, but the frequencies are different.

One possible application of such a redirecting antenna would be an acoustic beam splitter. Indeed, if an incoming signal has a wide spectrum of frequencies, then two pure tones with frequencies depending on the parameters of the chain and the angle of incidence can be extracted and redirected along the chain.

Due to different dispersion behavior of the eigenmodes corresponding to these two tones, the eigenmodes propagate in opposite directions. Thus, splitting of two pure tones becomes possible if we use a chain of perforated shells. Since the frequencies of the eigenmodes change smoothly with changing incidence angle, this angle can be recovered. This means that the chain may also serve as a passive acoustic detector which determines the direction to the source of incoming signal.