Traumatic brain injuries from blast exposure have been called the “signature injury” of military conflicts in Iraq and Afghanistan. This is largely due to our enemies’ unprecedented reliance on explosive weaponry such as improvised explosive devices (IED) (Figure 1). Estimates indicate that approximately 19.5% of deployed military personnel have suffered traumatic brain injuries since 2001 (Rand Report, Invisible Wounds of War, 2008). With more than 2 million service members deployed to Iraq and Afghanistan, this means that over 400,000 American Veterans are currently living with the chronic effects of blast exposure. 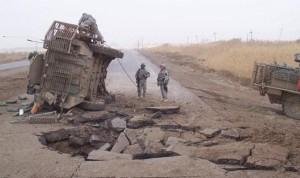 Figure 1 caption: An armored military vehicle lies on its side after surviving a buried IED blast on April 15, 2007. The vehicle was hit by a deeply buried improvised explosive device while conducting operations just south of the Shiek Hamed village in Iraq. Photograph courtesy of the U.S. Army: http://www.army.mil/article/9708/general-lee-rides-again/

When a blast wave from a high-intensity explosive impacts the head, a wave of intense heat and pressure moves through the skull and brain. Delicate neural tissues are stretched and compressed, potentially leading to cell damage, cell death, hemorrhaging, and inflammation. All regions of the brain are at risk of damage, and the auditory system is no exception. In recent years, increasing numbers of young Veterans with blast exposure have sought help from VA audiologists for hearing-related problems such as poor speech understanding. However, standard tests of hearing sensitivity often show no signs of hearing loss. This this combination of factors often suggests damage to areas in the brain dealing with auditory signals.   The efforts of hearing health professionals to help these Veterans are hampered by a lack of information regarding the effects of blast exposure on auditory function. The purpose of this presentation is to present some early results of a study currently underway at the National Center for Rehabilitative Auditory Research (NCRAR) investigating the long term consequences of blast exposure on hearing. Discovering the types of auditory problems caused by blast exposure is a crucial step toward developing effective rehabilitation options for this population.

Figure 2 caption: Average EEG responses from blast-exposed and control participant groups in response to a large change in tone pitch. The horizontal axis shows time since the pitch changed (which occurred at time 0 on this axis). The vertical axis shows the magnitude of the neural response of the brain. Notice that the peak of activity in the control group (blue star labeled ‘P300’)is considerably larger and occurs earlier in time compared to the blast-exposed group (red star labeled ‘P300’).

Self-assessment and behavioral performance measures are supported by numerous direct measures of auditory processing. Using a type of electroencephalography (EEG), we non-invasively measure the response of the brain to sound by assessing the timing and size of neural activity associated with sound perception and processing. These tests reveal that the brains of blast-exposed Veterans require more time to analyze sound and respond less actively to changes in sounds. For example, the average EEG responses of blast-exposed and control participants are shown in Figure 2. These waveforms reflect neural detection of a large change in the pitch of tones presented to participants. Notice that the peak marked ‘P300’ is larger and occurs earlier in time in control participants compared to blast-exposed Veterans. Similar effects are seen in response to more complex sounds, such as when participants are asked to identify target words among non-target filler words. Overall, these EEG results suggest degraded sound processing in the brains of blast-exposed Veterans compared to control participants.