Cardiovascular disease is a leading cause of death in the United States and worldwide. Atherosclerosis, or the stiffening of arteries, contributes to damage of downstream organs such as the brain and heart. If early atherosclerosis can be identified, it may be treated. Our research is motivated by developing a diagnostic tool for early detection of atherosclerosis using one of the cheapest and safest modalities, medical ultrasound, which can used widely across the world. 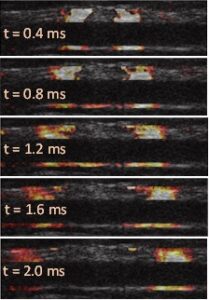 The target for this work is on estimating the stiffness and other mechanical properties of the carotid artery, a well-known indicator of cardiovascular disease. To accomplish this aim, we use a technique called shear wave elastography, where the wave propagation characteristics measured in the arterial wall are used to estimate the stiffness of the artery. Specifically, we use acoustic radiation force, resulting from focused ultrasound waves from an ultrasound probe to tap on the wall of the artery. This tap creates waves that travel within the artery wall, which are also measured with the same ultrasound probe. In this work, we present algorithms that convert the wave motion measured with ultrasound to values of arterial stiffness.