Cancer is a disease that is defined by uncontrolled growth of cells in our body. The aberrant growth is caused by genetic errors which lead either to the gain of growth signals or the loss of growth inhibitors. Both scenarios result in normal cells growing and replicating in abnormal ways and leading to tumors. Today, molecularly targeted therapies aim at re-establishing the equilibrium of cell growth regulators in order to stop tumor growth. Unfortunately, the abnormal signals causing tumors can vary between patients. In fact, even different tumors in the same patient can have different underlying growth signals. This phenomenon is called heterogeneity. It is crucial to understand which abnormal signaling molecules are causing the patient’s tumor prior to treatment. With this information, a physician can make a more educated decision on treatment choices for each patient and their particular tumor in order to increase the chances for a positive response to therapy. This new approach is known as personalized or precision medicine.

Netrin-1 is a tumor-stimulating molecule which was discovered to contribute to tumor growth in different types of cancer, including 60% of metastatic breast cancer (most frequent type of cancer in women worldwide). A therapy was developed aiming at the inhibition of netrin-1’s activity and reducing tumor growth. Only tumors presenting netrin-1 are expected to benefit from netrin-1-targeted therapy while tumors without netrin-1 require alternative therapies (Figure 1). To identify breast cancer patients presenting netrin-1, we propose the use of medical ultrasound imaging. To do so, we used microbubbles, which serve as a contrast medium in ultrasound imaging. These microbubbles were modified to recognize the netrin-1 molecule when injected into the blood circulation (Figure 2).

In conclusion, our imaging study showed that these netrin-1-targeted microbubbles enable the non-invasive and near real-time visualization of netrin-1 in breast tumors using medical ultrasound imaging. We are convinced that medical ultrasound imaging can allow the detection of tumor-promoting molecules, such as netrin-1, and enable personalized medicine, which means to diagnose the molecular profile of breast cancer patients and adapt the therapy approach to the specific needs of the patient.

Figure 1: Differences in molecular composition between different tumors. The tumor of the right patient presents netrin-1 and makes the patient eligible for netrin-1-targeted therapy. The patient on the left lacks netrin-1 and requires an alternative therapy. 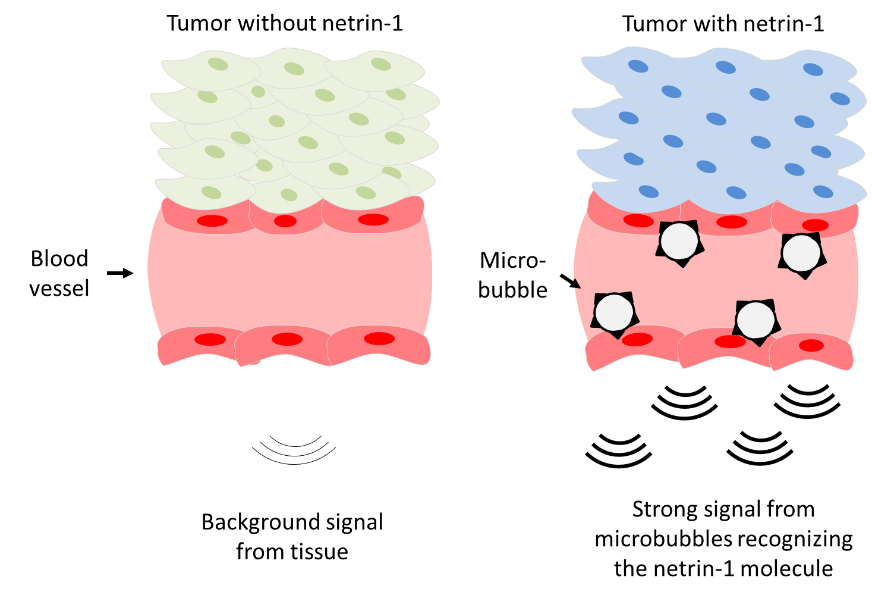