The assessment of the human skeletal health condition is of great importance ranging from newborn infants to the elderly. Annually, approximately fifty percent of the 550,000 premature newborn infants in the United States suffer from bone metabolism related disorders such as osteopenia, which affect the bone development process into childhood. As we age through adulthood, reductions in our bone mass increases due an unbalance activity in the bone reformation process leading to bone diseases such as osteoporosis; putting a person at risk for fractures in the neck, hip and forearm areas.

QUS has been sought as a nonionizing and noninvasive alternative to DEXA. QUS utilizes measurements of ultrasonic waves between a transmitting and a receiving transducer aligned in parallel along bone surface. Speed of sound (SOS) measurements of the received ultrasonic signal is used to characterize the bone material properties. The determination of the SOS parameter is susceptible to the amount of soft tissue between the skin surface and the bone. Thus, we propose utilizing a high intensity ultrasonic wave known as a “push beam” to exert a force on the bone surface thereby generating vibrations. This will minimize the effects of the soft tissue. The radiate sound wave due to these vibrations are captured and used to analyze the bone mechanical properties.

This work demonstrates the feasibility of evaluating bone mechanical properties from sound waves due to bone vibrations. Under an approved protocol by the Mayo Clinic Institutional Review Board (IRB), human volunteers were recruited to undergo our noninvasive bone assessment technique. Our cohort consisted of clinically confirmed osteopenia and osteoporosis patients, as well as normal volunteers without a history of bone fractures. An ultrasound probe and hydrophone were placed along the volunteers’ tibia bone (Figure 1a). A B-mode ultrasound was used to guide the placement of our push beam focal point onto the bone surface underneath the skin layer (Figure 1b). The SOS was obtained from the measurements.

Figure 1. (a) Probe and hydrophone alignment along the tibia bone. (b) Diagram of an image-guided push beam focal point excitation on the bone surface.

In total 14 volunteers were recruited in our ongoing study. A boxplot comparison of SOS between normal and bone diseased (osteopenia and osteoporotic) volunteers in Figure 2, shows that typically sound travels faster in healthy bones than osteoporotic and osteopenia bones with SOS median values (red line) of 3733 m/s and 2566 m/s, respectively. Hence, our technique may be useful as a noninvasive method for monitoring the skeletal health status of the premature and aging population. 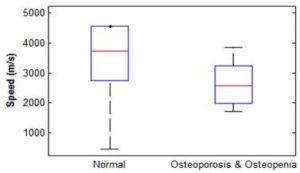 This ongoing project is being done under an approved protocol by Mayo Institutional Review Board.