Type1 diabetes is an autoimmune disease in which the insulin-producing cells in the pancreas are destroyed. As a result people with type1 diabetes have to take insulin for the rest of their life. This is not a cure, and as well as the significant patient burden there are still risks for complications of diabetes that include eye, kidney and heart damage, as well as potentially falling into a coma from insulin overdose and low blood sugar. Strategies have been developed to prevent type1 diabetes through immune therapies that stop the destruction of insulin producing cells. Treatment early in the disease process, before significant destruction of insulin producing cells will be needed. However it is challenging to predict if an individual will get type1 diabetes and when, limiting the ability to intervene early.

Imaging approaches have been explored to detect the presence of autoimmune disease and concurrent inflammation in the pancreas, and loss of the insulin-producing cells. However there have been limited successes. A potential approach is based on the blood vessels become leaky during the autoimmune disease and inflammation in the pancreas. Thus small particles below 1um diameter can leak and accumulate in the diseased tissue. We have proposed to leverage the inherent advantages of ultrasound imaging that include deployability, cost-effectiveness and safety profile. Ultrasound contrast agents consist of gas filled bubbles (microbubbles). However the size of thee microbubbles means that they cannot access diseased tissue and are restricted to blood vessels. We have utilized a novel phase-change ultrasound contrast agent that consists of a condensed liquid droplet that is stable at body temperature and in circulation. However the acoustic beam from an ultrasound transducer can vaporize these droplets into microbubbles that provide ultrasound contrast. Thus these phase-change agents serve as circulating microbubble precursors that can access diseased tissue.

As such the use of phase-change ultrasound contrast agents shows significant promise for detecting and tracking the presence of autoimmune disease and inflammation in the pancreas that heralds the development of type1 diabetes (Figure 2). Such a measurement would guide therapeutic intervention to prevent type1 diabetes, as well as assess the efficacy of such a treatment. Successful disease prevention will avoid the need for lifelong insulin therapy and complications of diabetes. 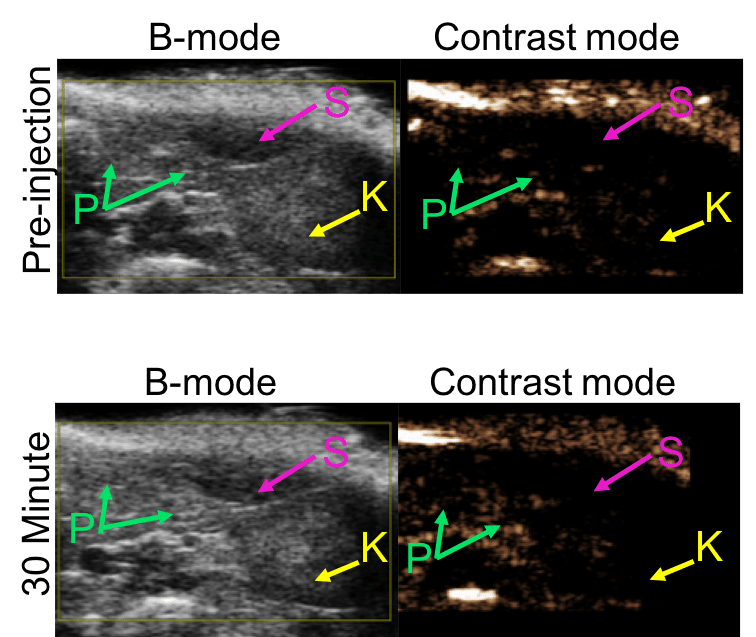 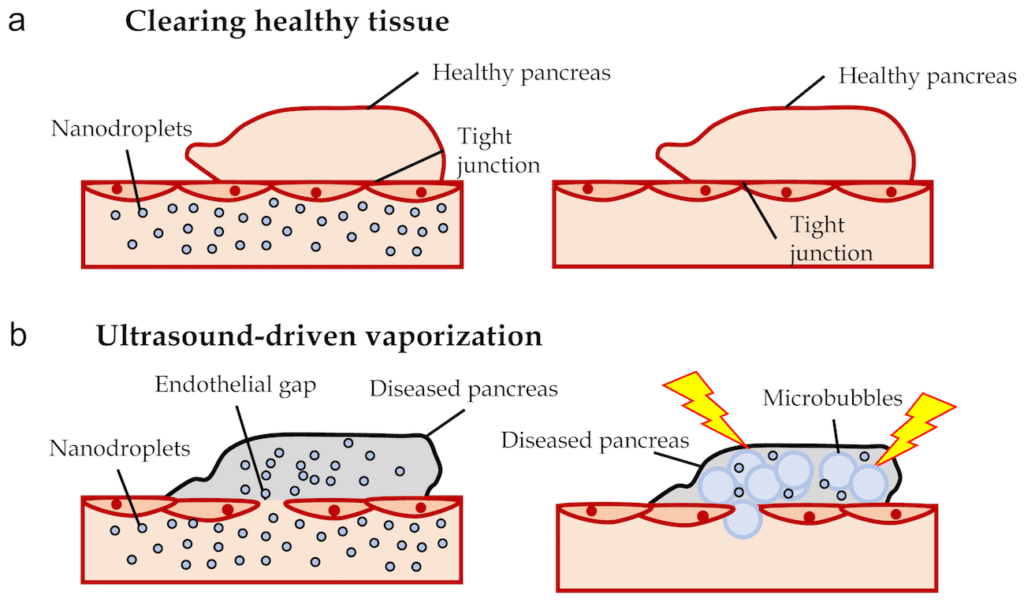