Feasibility of using ultrasound with microbubbles to purify cell lines for immunotherapy application.

Cells are isolated and sorted for a variety of diagnostic (e.g., blood tests) and therapeutic (e.g., stem cells, immunotherapy) applications, as well as for general research. The workhorses in most research and commercial labs are fluorescently-activated cell sorters (FACS) [1] and magnetically-labeled cell sorters (MACS) [2]. These tools use biochemical labeling to identify and/or sort cells which express specific surface markers (usually proteins). FACS uses fluorophores that target specific cell markers. The detection of a specific fluorescence wavelength tells the system to sort those cells. FACS is powerful and can sort based on several different cellular markers. However, FACS is also very expensive and complicated such that they are mostly found only in large core facilities.

MACS uses magnetic beads that attach to cell markers. Permanent magnets can then be used to separate magnetically-tagged cells from untagged cells. MACS is much less expensive than FACS, and can be found in most labs. However, MACS also suffers from weaknesses, such as low throughput, and can only sort based on a single marker.

We describe a new method that merges biochemical labeling with ultrasound-based separation. Instead of lasers and fluorophore tags (i.e., FACS), or magnets and magnetic particle tags (i.e., MACS), our technique uses ultrasound and microbubble tags (Fig. 1). Like FACS and MACS, we attach a biochemical label (an antibody) to attach a microbubble to the cell’s surface protein. We then employ an ultrasound pulse that generates an acoustic radiation force, pushing the microbubbles; the attached cells are dragged along with the microbubbles, effectively separating them from untagged cells. This is accomplished because cells only very lightly interact with ultrasound, whereas microbubbles interact very significantly with the sound waves. We theorized that the force acts on the microbubble while the cell acts as a fluid that adds a viscous drag to the system (see [3]). 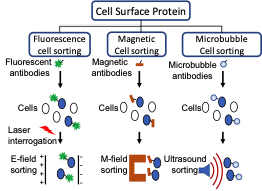 We can break down our studies into two categories, cell rotation and cell sorting. In both cases we constructed an apparatus to view cells under a microscope. Figure 2 shows a cell rotating as the attached microbubbles align with the sound field (the movie can be found by clicking here). We developed a theory to describe this rotation, and the theory fits the data well, allowing us to ‘measure’ the acoustic radiation force on the conjugate microbubble-cell system (Fig. 3).

Figure 2. A leukemia cell has two attached microbubbles. An ultrasound pulse from above causes the cell to rotate.

When placed in a flow stream with other cells, the tagged cells can be easily pushed with ultrasound. Figure 4a shows how a single leukemia cell is pushed downward while normal erythrocytes (red blood cells) continue flowing in the stream (the movie can be found by clicking here). This shows that one can effectively separate tagged cells. However, in a commercial setting, one wants to sort with a much higher concentration of cells. Figure 4b illustrates that this can be accomplished with our simple setup (the movie can be found by clicking here).

To summarize, we show preliminary data that supports the notion of developing an ultrasound-based cell sorter that has the potential for high throughput sorting at a fraction of the cost of FACS.