Assembling an acoustic catalogue for different dolphin species in the Colombian Pacific coast: an opportunity to parameterize whistles before rising noise pollution levels.

Growing ship traffic worldwide has led to a relatively recent increase in underwater noise, raising concerns about effects on marine mammal communication. Many populations of several dolphin species inhabit the eastern Pacific Ocean, particularly along the Chocó coast of Colombia. Recent research has confirmed that anthropologic noise pollution levels in this region are one of the lowest in any studied area around the globe, allowing an opportunity for scientists to listen and analyze a relatively undisturbed soundscape in our oceans.

Figure 1. Vessel traffic in the Americas (a) and in (b) Colombia in particular. Red indicates high traffic and blue areas have no traffic. Note the gap in traffic in the Colombian Pacific coast where the Gulf of Tribugá is located (inside black/red box) as compared to all other coastal regions.

Currently, the CPC is slated for the construction of a port in the Gulf of Tribugá, pending permits. Previous port construction projects in other countries have shown that this will change the acoustic environment and could compromise marine fauna, such as dolphin communication. This is the first study to document the whistle acoustic parameters from several dolphin species in the region before any disturbance. Opportunistic recordings were made in two different locations alongside the coast: Coquí, Chocó, and a few hundred kilometers north Bahía Solano, Chocó.

Five different delphinid species were recorded: Common bottlenose dolphin (Tursiops truncatus), Pantropical spotted dolphin (Stenella attenuata), Spinner dolphin (Stenella longirostris), False killer whale (Pseudorca crassidens) and Short- beaked common dolphin (Delphinus delphis). Comparing these recordings to those made from dolphin populations in more disturbed areas around the globe showed that the repertoires of four of the five species were different. These differences could be because the Chocó dolphins represent populations that use whistles with more natural features while the other, more disturbed, populations may have already changed their whistle features to avoid overlapping with boat traffic noise.

However, avoiding overlap with other conspecifics or other species in the same habitat is natural, too. This is called the acoustic niche hypothesis (ANH). The ANH states that geographically sympatric species should occupy specific frequency bands to avoid overlapping with each other. A Linear Discriminant Analysis (LDA) was done to explore whether the five different species have already adjusted their whistle features to avoid overlapping with other species. Frequency band separation is not the only feature of whistles that dolphins could adjust. The LDA used nine different features to observe if there is any natural division between any of the features. 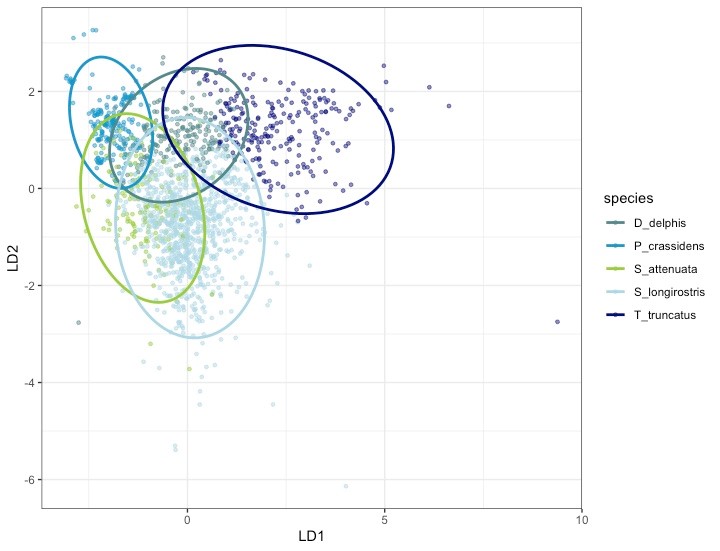 Tracking these whistle features in Chocó over time will help determine whether the different whistle features between the Chocó dolphins and dolphins from more disturbed areas are a result of the natural acoustic niche hypothesis or a result of noise pollution avoidance. If constructed, the port could force species to adjust their whistle features like populations from noisier habitats already have, and that could disrupt the acoustic niches that already exist, some of their whistles may still be interrupted by boat noise. Such disturbances could increase their stress levels or could lead to area abandonment, which would cause economic and ecological disasters for the region that relies on artisanal fishing and ecotourism.