With the rise in global shipping traffic, marine mammals are at an ever-increasing risk of vessel collision. These incidents may result in injury or mortality, which can be especially detrimental to endangered species. Predicting the risk of vessel collisions for a given species through modeling can be a useful way to determine whether protective measures are needed.

The risk of vessel collision is often assessed using statistical models that overlay the the density and distribution of animals with that of vessels. This approach does not typically account for the behavior of the animal, in part due to a lack of information on the specific responses of individual animals to vessels. This can include aversive behavior like moving away from the vessel or changing speed, which could have an important impact on collision estimates.

An alternative approach to measuring the risk of vessel collision is modeling the individual behavior of the animals around the vessels. This type of modeling is often used to estimate the sound exposure of simulated animals, called ‘animats’, that move within computed sound fields. For this study, we built on such a model, the JASCO Animal Simulation Model Including Noise Exposure, which is used primarily for estimating the sound exposure of individual animals. A vessel collision framework was developed for Southern Resident killer whales (SRKWs), an endangered species with a small and declining population size. We chose to model an area in Boundary Pass, British Columbia. This is an important habitat for this species that also encompasses a busy shipping lane. In the model, we included the movement data of real vessels that traveled through the area as well as the modeled sound fields of those vessels. We then incorporated animats into the model, which were programmed to behave like SRKWs based on published high-resolution animal movement data. Lastly, we allowed our simulated animals to avert away from vessels based on factors known to initiate a response in this species: the loudness of vessels, the distance to those vessels, and the total number of vessels. Including aversion allowed the animats to respond increasingly to louder, closer, and multiple vessels by changing their heading, speed, and behavioral state. Animats were considered to be involved in a vessel collision if they got within a calculated encounter area of a modeled vessel despite any aversive reactions. 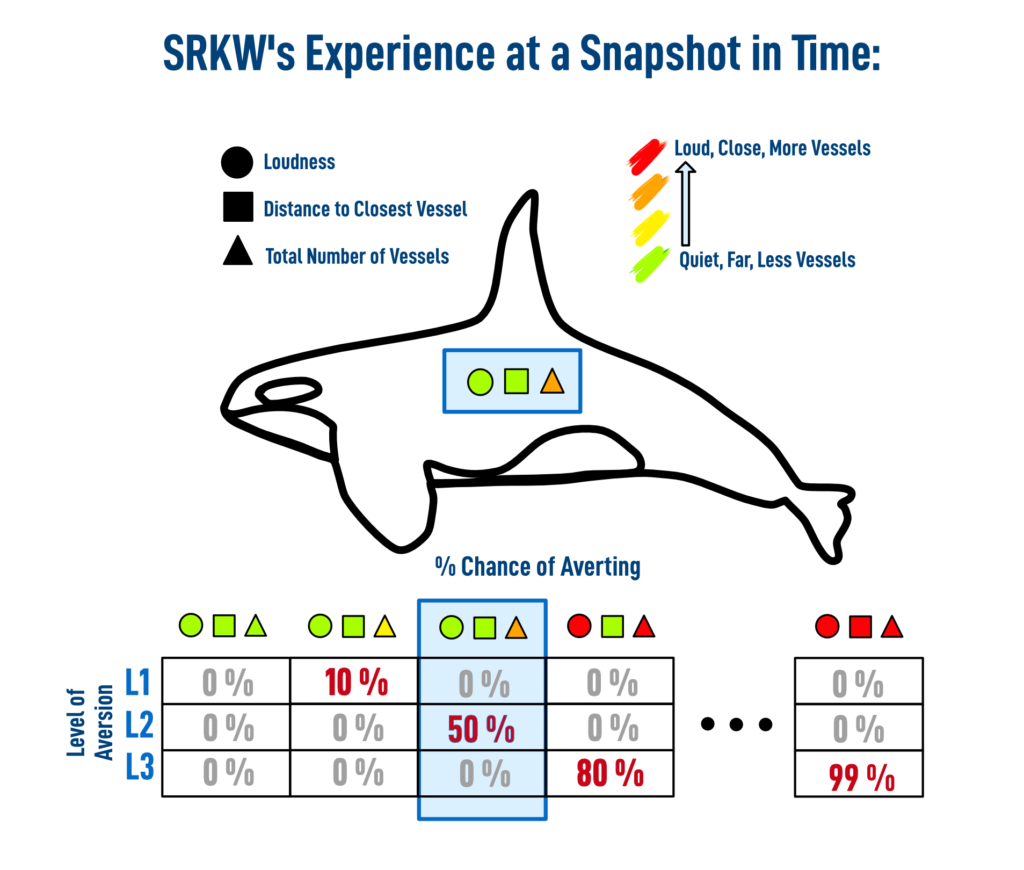 Conceptual diagram of the sources of disturbance (colored shapes) and their magnitude (color gradient) used to predict the level of aversion that an animat experiences at any time step. The Southern resident killer whale in the diagram represents a snapshot of one time-step in the model.

Animats were mostly able to avoid vessel collision, however a small number came within the encounter area of a vessel and were thus considered to be struck by that vessel. We are now investigating whether there are any patterns in the combinations of factors that lead to these collisions. The next steps in developing the model further will be to incorporate uncertainty, investigate the sensitivity of the behavioral parameters, and incorporate additional data on aversive behavior in SRKWs. The goal of this approach is to determine the scenarios where SRKWs are most at risk of vessel collision. Ultimately, this model can be generalized to model collision risk in other species.