The current technology in our daily lives including medical devices, requires electrical power. Preferably, these devices use batteries, making the systems portable and easy to use. Alas we all have experienced a power-deprived cell phone or tablet, which we wished would be easily chargeable without a cable. Similarly, devices such as pacemakers and neurostimulators, implanted inside the patient’s body need charging. Each of these scenarios – from real-world power needs to powering implants, would best require a wireless solution to keep the batteries charged, and devices functioning.

The “high-school taught” piezo-electric effect, is practically leveraged by Arizona scientists, Drs. Inder Makin and Leon Radziemski, to provide wireless ultrasound powering (UWP) for several applications. A mm-thin (1/32”), ultrasound disk vibrates at a fixed pitch (frequency), when a voltage is applied across its face. The vibrations propagate through material, such as body tissue (not very efficient in air!). Conversely, a similar disk placed in a material medium where a vibrational beam is present, will generate a voltage at the frequency of the vibration, converting ultrasound to electrical power. The use of an ultrasound transmitter and receiver approach has enabled wireless ultrasound powering (UWP), from sophisticated body-implant powering to charging batteries for digital devices, like smartphones and tablets used primarily in healthcare settings – clinics, emergency rooms, procedure suites.

The video below demonstrates the charging of an implant battery – UltraSound electrical Recharging (USer), using a simple, light device the size of a hockey puck that is attached to the skin. The transmitter senses the need for power in the implant, charges the battery, and communicates to the end user, that it is done.

This concept was tested in live animal studies, in order to prove feasibility and safety of the procedure. When a miniaturized implant prototype with a piezo-receiver, was placed inside a pig’s body. The ultrasound transmitter safely charged the implant battery in less than 30 minutes.

Since ultrasound energy can be steered electronically, while the device is compact, the USer concept can be made fully hands free as shown in the figure below. Sensors on the Transmitter and Receiver sense the misalignment and the beam corrects itself to efficiently charge the battery. 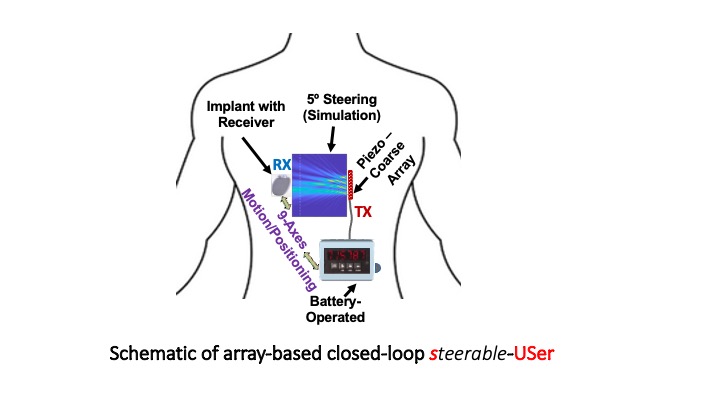 Broadening its applications, Piezo Energy Technologies, has demonstrated the charging of smart phones and other digital devices, without wires, using their patented technology. The picture below shows prototypes which are used for efficient charging of a smartphone. 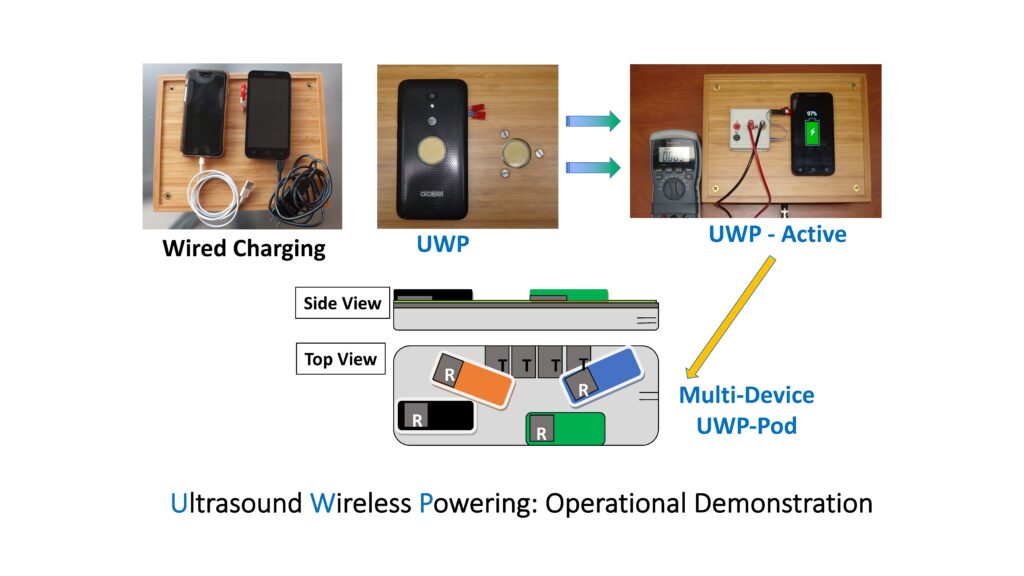 Multiple devices can be charged simultaneously, such as on top of a Ultrasound-PowerTM Pod. In these days of infection control requirements, using a wireless charging system is highly desired, anyway.

Why ultrasound? Compared to existing electromagnetic wireless devices, ultrasound can propagate efficiently through several solid and liquid materials, including metals. The transmitted ultrasound beam is like a flashlight, causing no stray energy, especially due to very inefficient ultrasound propagation through air.

The electronically steerable energy travels to the receiver where it is needed, and reduces one less source of wireless electromagnetic radiation in our daily environment!