4pMU4 – How Well Can a Human Mimic the Sound of a Trumpet? -Ingo R. Titze

How Well Can a Human Mimic the Sound of a Trumpet?

Popular version of paper 4pMU4 “How well can a human mimic the sound of a trumpet?”

Man-made musical instruments are sometimes designed or played to mimic the human voice, and likewise vocalists try to mimic the sounds of man-made instruments.  If flutes and strings accompany a singer, a “brassy” voice is likely to produce mismatches in timbre (tone color or sound quality).  Likewise, a “fluty” voice may not be ideal for a brass accompaniment.  Thus, singers are looking for ways to color their voice with variable timbre.

Acoustically, brass instruments are close cousins of the human voice.  It was discovered prehistorically that sending sound over long distances (to locate, be located, or warn of danger) is made easier when a vibrating sound source is connected to a horn.  It is not known which came first – blowing hollow animal horns or sea shells with pursed and vibrating lips, or cupping the hands to extend the airway for vocalization. In both cases, however, airflow-induced vibration of soft tissue (vocal folds or lips) is enhanced by a tube that resonates the frequencies and radiates them (sends them out) to the listener.

Around 1840, theatrical singing by males went through a revolution.  Men wanted to portray more masculinity and raw emotion with vocal timbre. “Do di Petto”, which is Italien for “C  in chest voice” was introduced by operatic tenor Gilbert Duprez in 1837, which soon became a phenomenon.  A heroic voice in opera took on more of a brass-like quality than a flute-like quality.  Similarly, in the early to mid- twentieth century (1920-1950), female singers were driven by the desire to sing with a richer timbre, one that matched brass and percussion instruments rather than strings or flutes.  Ethel Merman became an icon in this revolution. This led to the theatre belt sound produced by females today, which has much in common with a trumpet sound.

Fig.1.  Mouth opening to head-size ratio for Ethel Merman and corresponding frequency spectrum for the sound “aw” with a fundamental frequency fo (pitch) at 547 Hz and a second harmonic frequency 2 fo at 1094 Hz.

The length of an uncoiled trumpet horn is about 2 meters (including the full length of the valves), whereas the length of a human airway above the glottis (the space between the vocal cords) is only about 17 cm (Fig. 2). The vibrating lips and the vibrating vocal cords can produce similar pitch ranges, but the resonators have vastly different natural frequencies due to the more than 10:1 ratio in airway length.  So, we ask, how can the voice produce a brass-like timbre in a “call” or “belt”? 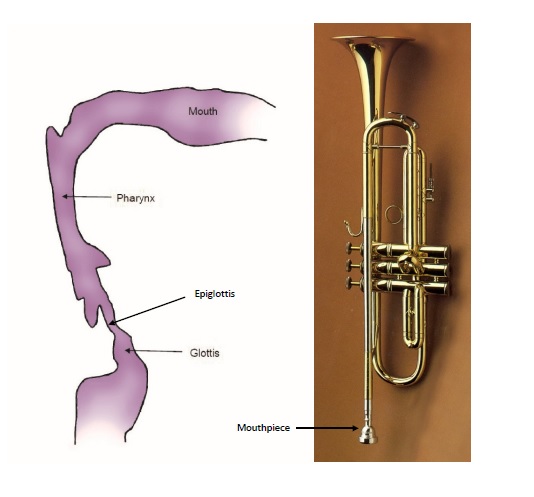 Fig 2.  Human airway and trumpet (not drawn to scale).

Why does that resonance adjustment produce a brass-like timbre?  To understand this, we first recognize that, in brass-instrument playing, the tones produced by the lips are entrained (synchronized) to the resonance frequencies of the tube.  Thus, the tones heard from the trumpet are the resonance tones. These resonance tones form a harmonic series, but the fundamental tone in this series is missing.  It is known as the pedal tone.  Thus, by design, the trumpet has a strong second harmonic frequency with a missing fundamental frequency.

Perceptually, an imaginary fundamental frequency may be produced by our auditory system when a series of higher harmonics (equally spaced overtones) is heard.  Thus, the fundamental (pedal tone) may be perceptually present to some degree, but the highly dominant second harmonic determines the note that is played.

In belting and loud calling, the fundamental is not eliminated, but suppressed relative to the second harmonic.  The timbre of belt is related to the timbre of a trumpet due to this lack of energy in the fundamental frequency.  There is a limit, however, in how high the pitch can be raised with this timbre.  As pitch goes up, the first resonance of the airway has to be raised higher and higher to maintain the strong second harmonic.  This requires ever more mouth opening, literally creating a trumpet bell (Fig. 3).

Fig 3. Mouth opening to head-size ratio for Idina Menzel and corresponding frequency spectrum for a belt sound with a fundamental frequency (pitch) at 545 Hz.

One final comment about the perceived pitch of a belt sound is in order.  Pitch perception is not only related to the fundamental frequency, but the entire spectrum of frequencies.  The strong second harmonic influences pitch perception. The belt timbre on a D5 (587 Hz) results in a higher pitch perception for most people than a classical soprano sound on the same note. This adds to the excitement of the sound.