4pNSa4 – Inciting our children to turn their music down: the “Age of Your Ear” concept -Jeremie Voix

Inciting our children to turn their music down: the “Age of Your Ear” concept.

Fig. 1 : While hearing will normally worsen because of the natural aging process (dotted black line), this ageing can be dramatically accelerated because of over-exposure to noise (solid color lines). 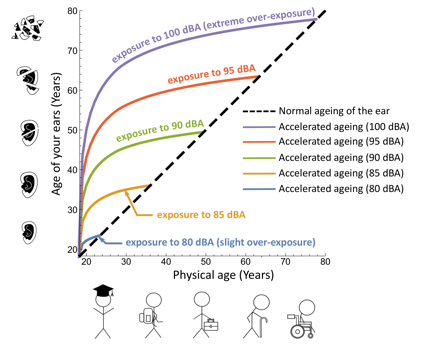 Popular version of paper 4pNSa4, “Inciting our children to turn their music down: the AYE concept.”

According to the World Health Organization (WHO), more than 1.1 billion people are currently at risk of losing their hearing due to excessive exposure to noise. Of this, a significant proportion consists of children, youth and young adults who are exposing themselves to excessive levels of sound through various leisure activities (music players, concerts, movies at the theatre, dance clubs, etc.).

To address this issue, many approaches have been developed, ranging from general awareness messages to volume limiters on personal music players. For instance, the recent “Make listening safe” [1] initiative from WHO aims at gathering all stakeholders, public health authorities, and manufacturers to define and develop a consolidated approach to limit these non-occupational sound exposures, based on dosimetry. Indeed, significant efforts have been put into the idea of assessing directly on a PMP (personal music player) the individual noise dose, i.e. the product of the sound pressure level  and the duration, induced during music listening.

Need to find a better way to sensitize the users

While many technical issues are still actively discussed in some related standards, a major concern arose with regards to the message communicated to the end-users. End-users need to be educated on the risk of noise induced hearing loss (NIHL) and its irreversibility, but at the same time they also need to be made aware that NIHL is 100% preventable pending safe listening practices are followed.

More importantly, end users have to be left with an appealing noise dose measurement. In that regard, expressing equivalent sound pressure level in decibels (dB) or the noise dose in percentage (%) is of little value given the complexity of one and the abstraction of the other. But communicating about the dangers of music playback is definitely something very new for most of the hearing conservation specialists and communicating with this particular group of youth is only adding to the difficulty.

In the quest for a meaningful message to pass to these young end users, this article introduces a new metric, the “Age of Your Ears” (AYE), that is an indication of the predicted extra aging caused by the excessive noise dose each user is exposed to. To perform such prediction, a multi-regression statistical model was developed based on normative data found in ISO 1999 [2] standard. This way, an AYE value can be computed for each subject, using only his age, sex and sound exposure, to represent the possible acceleration of aging caused by excessive music listening, as illustrated in Fig. 1.

In a world where personal musical players are ubiquitous, and have also been putting hearing at risk, it is interesting to see them as potential tool, not only to address the issues they created, but also for raising awareness on the dangers of Noise-Induced Hearing Loss at large.

The proposed AYE metric will be first implemented in a measurement manikin setup that is currently under development at the Centre for Interdisciplinary Research in Music Media and Technology, housed at the Schulich School of Music at McGill University (CIRMMT). This setup, further described in [3], is inspired by the “Jolene” manikin developed though the “Dangerous Decibels” program [4]. The resulting measurement kiosk will be complemented by a smartphone-based measurement app that will enable musicians to assess their entire noise exposure. It is hoped that the proposed AYE metric will be relevant and simple enough to have a beneficial impact on everyone’s safe hearing practices.

[3] Jérémie Voix, Romain Dumoulin, Julia Levesque, and Guilhem Viallet. Inciting our children to turn their music down : the AYE proposal and implementation. In Proceedings of Meetings on Acoustics , volume Paper 3007868, Victoria, BC, Canada, 2018. Acoustical Society of America.