When in use, many structures – like driveshafts, windmill blades, ship hulls, etc. – tend to vibrate, casting pressure waves (aka sound) into the surrounding environment. When worn or damaged, these systems may vibrate differently, resulting in measurable changes to the broadcast sound. This presents an opportunity for the enterprising acoustician: could you monitor systems, and even locate structural defects, at a distance by exploiting acoustic changes? Such a technique would surely be useful for structures that are difficult to reach or that are in challenging environments, like ships in the ocean – though these benefits would come at the cost of the added complexity to measure sound precisely. This work shows that yes, it is possible to localize defects using only acoustic measurements, and such a technique is validated with two proof-of-concept experiments.

In cases where damage affects how a structure vibrates locally (e.g. near the defect), localizing the damage reduces to finding out where the source of the sound is changing. The most common method for figuring out where sound is coming from is known as beamforming. Put simply, beamforming involves listening for sounds at different points in space (using multiple microphones known as an array) then looking for relative time delays between microphones to back out the direction(s) of the incident sound. This presents two distinct challenges for locating defects: 1) the acoustic changes from a defect are pretty small compared to all the sound being generated, so they can easily get ‘washed out’. This can be addressed by using previously recorded measurements of the undamaged structure, then subtracting these recordings in a special way such that the differences between the damaged and undamaged structures are localized. Even then, more advanced high-resolution beamforming techniques are needed to precisely pinpoint changes. This leads to the second challenge, 2) Sound emitted from vibrating structures is typically coherent (meaning that sounds coming from different directions are strongly related) and this causes problems for high-resolution beamforming. However, a trick can be used wherein the full array of microphones is divided into smaller subarrays that can then be averaged in a special way to side-step the coherence problem.

Two validation experiments were conducted. In the first, an 8×8 array of 64 microphones was used to record 5kHz pulses from small loudspeakers at various locations on the floor (Figure 1). With three speaker sources in an arbitrary configuration, a recording was made. The volume of one source was then reduced 20% and another measurement was made. Using the described method (with the 8×8 array subdivided and averaged over 25 4×4 subarrays) the 20% change was precisely located with great agreement to computer simulations of the experiment (Figure 2). To test for actual damage, in the second experiment, a 3.8-cm cut was added to a 30-cm-square aluminum plate. The plate, vibrated from below to induce sound, was recorded from above, with and without the cut. Once again using the special method described here, the change, i.e. the cut was successfully found (Figure 3) – a promising result for practical applications of the technique. 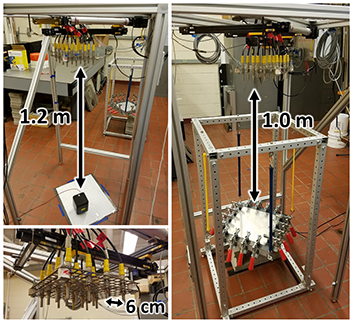 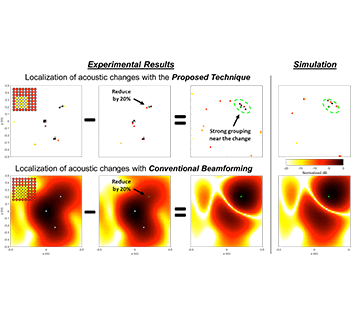 Figure 2: Results of the first experiment. The top row of images uses the proposed technique, while the bottom uses a conventional technique. A ‘subtraction’ between the two very similar acoustic measurements (far, center left) allows for precise localization of the 20% change (center right) and great agreement with simulated results (far right).

Figure 3: Results of the second experiment. The two left images show vibrational measurement of the plate (vibrated around 830 Hz) with and without the added cut, showing that the cut noticeably affects the vibration. The right image shows high-resolution acoustic localization of the cut using the described technique (at 3600 Hz).