In focused ultrasound surgery (FUS), an ultrasound source radiates pressure waves into the patient’s body to achieve a desired therapeutic effect. FUS has already gained regulatory approval in the U.S. for treating uterine fibroids and pain palliation for bone metastases; other applications – including prostate cancer, liver cancer, and neurosurgery – remain active topics for clinical trials and research. Because applications of FUS often involve high intensity levels, insufficient knowledge of the acoustic field in the patient could lead to damage of healthy tissue away from the targeted treatment site. In this sense, high-intensity ultrasound treatments could cause collateral effects much like radiotherapy treatments that use ionizing radiation. In radiotherapy, treatment planning is critical for delivery of an effective and safe treatment: Typically, CT or MRI is used to form a virtual patient and the treatment is planned by computer-aided design. Simulations are used to plan the geometric, radiological, and dosimetric aspects of the therapy using radiation transport simulations. Analogous to a radiation beam, ultrasound therapy uses an acoustic beam as a 3D “scalpel” to treat tumors or other tissues. Accordingly, there is motivation to establish standard procedures for FUS treatment planning that parallel those in radiotherapy [1, 2]. However, such efforts toward treatment planning first require very precise knowledge of the source transducer in order to accurately predict the acoustic beam structure inside the patient. 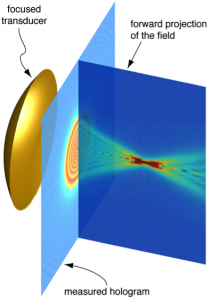 Fig. 1 Acoustic holography to characterize an ultrasound source, with schematic illustration of the corresponding ultrasound field. A measured hologram in a plane can be used to reconstruct the entire wave field anywhere in 3D space.

Toward this end, it is instructive to recognize that ultrasound comprises pressure waves and thus possesses several basic features of wave physics that can be used in practice. One such feature is the potential to reproduce a 3D wave field from a 2D distribution of the wave amplitude and phase. This principle was made famous in optics by Dennis Gabor (Nobel Prize, 1971), who invented holography [3]. A similar approach is possible in acoustics [4 – 8] and is illustrated in Fig. 1 for a therapeutic ultrasound source. To measure an acoustic hologram, a hydrophone (i.e., a microphone used underwater) can be scanned across a plane in front of the transducer. Because these measurements in 2D capture the whole field, this measured hologram can be used to reconstruct the surface vibrations of the source transducer. In turn, once the vibrations of the source are known, the corresponding acoustic field can be computed in water or tissue or any other medium with known properties.

Besides ultrasound surgery, holography techniques can be applied to characterize ultrasound transducers used for other therapeutic and diagnostic ultrasound-based applications. In this work we have used it for the first time to characterize a shock wave lithotripter source. Shock wave lithotripters radiate high intensity pulses that are focused on a kidney stone. High pressure, short rise time, and path-dependent nonlinearity make characterization in water and extrapolation to tissue difficult.
The electromagnetic lithotripter characterized in this effort is a commercial model (Dornier Compact S, Dornier MedTech GmbH, Wessling, Germany) with a 6.5 mm focal width. A broadband hydrophone (a fiber optic probe hydrophone, model FOPH 2000, RP Acoustics; Leutenbach, Germany) was used to sequentially measure the field over a set of points in a plane in front of the source. Following the previously developed transient holography approach, the recorded pressure field was numerically back-propagated to the source surface (Fig. 2). The method provides an accurate boundary condition from which the field in tissue can be simulated. 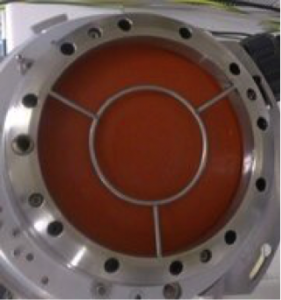 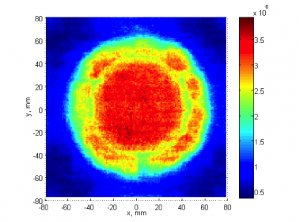 In addition, we use acoustic holography to characterize imaging probes, which generate short, transient pulses of ultrasound (Fig. 3). Accurate 3D field representations have been confirmed [9].

Fig. 3 Characterization of a diagnostic imaging probe. Top: A photo of the HDI C5-2 probe, which was excited at a frequency of 2.3 MHz. Middle: Holographically reconstructed pattern of vibration velocities along the probe surface. Bottom: Corresponding phase distribution.

We believe that our research efforts on acoustic holography will make it possible in the near future for manufacturers to sell each medical ultrasound transducer with a “source hologram” as a part of its calibration. This practice will enable calculation of the 3D ultrasound and temperature fields produced by each source in situ, from which the “dose” delivered to a patient can be inferred with better accuracy than is currently achievable.