Urinary stones (such as kidney or bladder stones) are an important health care problem. One in 11 Americans now has urinary stone disease (USD), and the prevalence is increasing. According to a 2012 report from the National Institute of Diabetes and Kidney and Digestive Diseases (Urological Diseases in America), the direct medical cost of USD in the United States is $10 billion annually, making it the most expensive urologic condition.

Our lab is working to develop more effective and more efficient ways to treat stones. Existing treatments such as shock wave lithotripsy or ureteroscopy are minimally invasive, but can leave behind stone fragments that remain in the kidney and potentially regrow into larger stones over time. We have successfully developed and demonstrated the use of ultrasound to noninvasively move stones in the kidney of human subjects. This technology, called ultrasonic propulsion (UP), uses ultrasound to apply a directional force to the stone, propelling it in a direction away from the sonic source, or transducer. Some stones need to be moved towards the ureteropelvic junction (the exit from the kidney that allows stones to pass through the ureter to the bladder) to aid their passage. In other cases, this technology may be useful to relieve an obstruction caused by a stone that may just need a nudge or a rotation to pass, or at least to allow urine to flow and decompress the kidney.

While UP is able to help stones pass, it is limited in how the stones can be manipulated by an ultrasound transducer in contact with the skin from outside the body. Some applications require the stone to be moved sideways or towards the transducer rather than away from it.

To achieve more versatile manipulation of stones, we are developing a new strategy to effectively trap a stone in an ultrasound beam. Acoustic trapping has been explored by several other researchers, particularly for trapping and manipulating cells, bubbles, droplets, and particles much smaller than length of the sound wave. Different configurations have been used to trap particles in standing waves and focused fields. By trapping the stone in an ultrasound beam, we can then move the transducer or electronically steer the beam to move the stone with it.

In this work, we accomplished trapping through the use of vortex beams. Typical focused beams create a single region of high ultrasound pressure, producing radiation force away from the transducer. Vortex beams, on the other hand, are focused beams that create a tube-shaped intensity pattern with a spiraling wave front (Fig. 1). The ultrasound pressure in the middle is very low, while the pressure around the center is high. The result is that there is a component of the ultrasound radiation force pushing the stone towards the center and trapping it in the middle of the beam. In addition to trapping, such a beam can apply a torque to the stone and can rotate it.

To test this idea, we simulated the radiation force on spheres of different materials (including stones) to determine how each would respond in a vortex beam. An example is shown in Fig 2. A lateral-axial cross section of the beam is displayed, with a spherical stone off-center in the tube-shaped beam. The red arrow shows that the force on the sphere is away from the center because the stone is outside of the vortex. Once the center of the stone crosses the peak, the force is directed inward. Usually, there is also some force away from the transducer still, but the object can be trapped against a surface.

We also built transducers and electrically excited them to generate the vortex in experiments. At first, we used the vortex to trap, rotate, and drag an object on the water surface (Fig. 3). By changing the charge of the vortex beam (the rate of spiraling generated by the transducer), we controlled the diameter of the vortex beam, as well as the direction and speed at which the objects rotated. We also tested manipulation of objects placed deep in a water tank. Glass or plastic beads and kidney stones placed on a platform of tissue-mimicking material. By physically shifting the transducer, we were able to move these objects a specified distance and direction along the platform (Fig 4). These results are best seen in videos at apl.uw.edu/pushing stones.

We have since worked on developing vortex beams with a 256-element focused array transducer. Our complex array can electronically move the beam and drag the stone without physically moving the transducer. In a highly focused transducer, such as our array, sound can even be focused beyond the stone to generate an axial high pressure spot to help trap a stone axially or even pull the stone toward the transducer.

There are several ways in which this technology might be useful for kidney stones. In some cases, it might be employed in gathering small particles together and moving them collectively, holding a larger stone in place for fragmentation techniques such as lithotripsy, sweeping a stone when the anatomy inhibits direct radiation force away from the transducer, or, as addressed here dragging or pulling a stone. In the future, we expect to continue developing phased array technology to more controllably manipulate stones. We are also working to develop and validate new beam profiles, and electronic controls to remotely gather the stone and move it to a new location. We expect that this sort of tractor beam could also have applications in manufacturing, such as ever shrinking electronics, and even in space.

Figure 1. The cross section at the focus for the ultrasound pressure of a vortex beam. The pressure magnitude (left) has a donut-shape distribution, whereas the phase (right) has a spiral-shape structure. A stone can be trapped at the center of the ring. 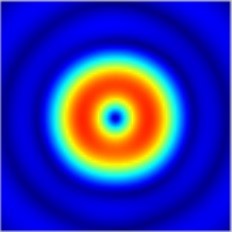 Figure 2. The simulated tubular field such as occurs in a vortex beam and its force on a stone. In this simulation the transducer is on the left and the ultrasound propagates to the right. The arrow indicates the force which depends on the position of the stone (see video ‘Vortex beam for transversal trapping.wmv’)

Figure 3. A small object trapped in the center of a vortex beam on the water surface. The ring-shaped impression due to radiation force on the surface can be seen. The phase difference between each sector element of the transducer affects the diameter of the beam and the spin rate. The 2 mm plastic object floating on the surface is made to rotate by the vortex beam (see video ‘’ Vortex beam rotates piece of plastic on water surface.wmv).

Figure 4. A focused vortex beam transducer in water (shown on the top) traps one of the styrofoam beads (shown in the bottom) and translates it in lateral direction (see video ‘Trapping and moving styrofoam beads underwater.wmv’)