Tennis Rackets and Injuries
The typical modern tennis racket has a light-weight, hollow graphite frame with a large head. Though these rackets are easier to swing, there seems to be an increase in the number of players experiencing injuries commonly known as “tennis elbow”. Recently, even notable professional players such as Rafael Nadal, Victoria Azarenka, and Novak Djokovic have withdrawn from tournaments because of wrist, elbow or shoulder injuries.

The preliminary study reported in this paper was an attempt to identify the vibrational characteristics that might explain why foam-filled rackets improve feel and reduce risk of injury.

Figure 1: Cross-section of the handle of a foam-filled racket (left) and a hollow racket (right).

Damping Rates
The first vibrational characteristic we set out to identify was the damping associated with first few bending and torsional vibrations of the racket frame. A higher damping rate means the unwanted vibration dies away faster and results in a less painful vibration delivered to the hand, wrist, and arm. Previous research on handheld sports equipment (baseball and softball bats and field hockey sticks) has demonstrated that bats and sticks with higher damping feel better and minimize painful sting [2,3,4].

We measured the damping rates of 20 different tennis rackets, by suspending the racket from the handle with rubber bands, striking the racket frame in the head region, and measuring the resulting vibration at the handle using an accelerometer. Damping rates were obtained from the frequency response of the racket using a frequency analyzer. We note that suspending the racket from rubber bands is a free boundary condition, but other research has shown that this free boundary condition more closely reproduces the vibrational behavior of a hand-held racket than does a clamped-handle condition [5,6].

Measured damping rates for the first bending mode, shown in Fig. 2, indicate no difference between the damping and decay rates for hollow and foam-filled graphite rackets. Similar results were obtained for other bending and torsional modes. This result suggests that the benefit of or preference for foam-filled rackets is not due to a higher damping that could cause unwanted vibrations to decay more quickly. 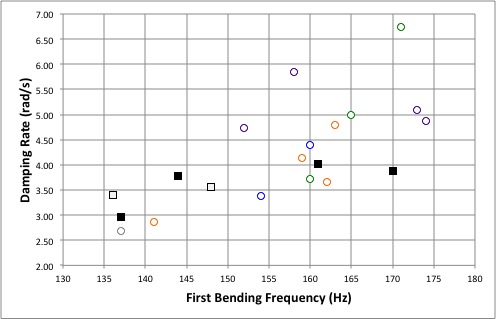 Figure 2: Damping rates of the first bending mode for 20 rackets, hollow (open circles) and foam-filled (solid squares). A higher damping rate means the vibration will have a lower amplitude and will decay more quickly.

Vibrational Mode Shapes and Frequencies
Experimental modal analysis is a common method to determine how the racket vibrates with various mode shapes at its resonance frequencies [7]. In this experiment, two rackets were tested, a hollow and a foam-filled racket of the same make and model. Both rackets were freely suspended by rubber bands, as shown in Fig. 3. An accelerometer, fixed at one location, measured the vibrational response to a force hammer impact at each of approximately 180 locations around the frame and strings of the racket. The resulting Frequency Response Functions for each impact location were post-processed with a modal analysis software to extract vibrational mode shapes and resonance frequencies. An example of the vibrational mode shapes for hollow graphite tennis racket may be found on Dr. Russell’s website. 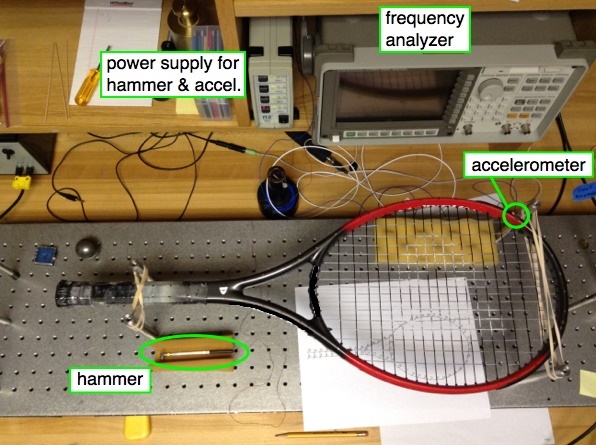 Figure 3: Modal analysis set up for a freely suspended racket.

Figure 4 compares the first and third bending modes and the first torsional mode for a hollow and foam-filled racket. The only difference between the two rackets is that one was hollow and the other was foam-filled. In the figure, the pink and green regions represent motion in opposite directions, and the white regions indicate regions, called nodes, where no vibration occurs. The sweet spot of a tennis racket is often identified as being at the center of the nodal line of the first bending mode shape in the head region [8]. An impact from an incoming ball at this location results in zero vibration at the handle, and therefore a better “feel” for the player. The data in Fig. 4 shows that there are very few differences between the mode shapes of the hollow and foam-filled rackets. The frequencies at which the mode shapes for the foam-filled rackets occur are slightly higher than those of the hollow rackets, but the difference in shapes are negligible between the two types.

Figure 4: Contour maps representing the out-of-plane vibration amplitude for the first bending (left), first torsional (middle), and third bending (right) modes for a hollow (top) and a foam-filled racket (bottom) of the same make and model.

Conclusions
This preliminary study shows that damping rates for this particular design of foam-filled rackets are not higher than those of hollow rackets. The modal analysis gives a closer, yet non-conclusive, look at the intrinsic properties of the hollow and foam-filled rackets. The benefit of using this racket design is perhaps related to a larger impact shock, but additional testing is needed to discover this conjecture.

While we are familiar with a wide variety of animals that use sound to communicate- birds, frogs, crickets, etc.- there are thousands of animal species that use vibration as their primary means of communication. Since sound and vibration are physically very similar, the two are inextricable connected, but biologically they are still somewhat separate modes of communication. Within the field of bioacoustics, we are beginning to fully realize how prevalent vibration is as a mode of animal communication, and how interconnected vibration and sound are for many species.

Wolf spiders are one group that heavily utilizes vibration as a means of communication, and they have very sensitive structures for “listening” to vibrations. However, despite the numerous vibrations that are involved in spider communication, they are not known for creating audible sounds. While a lot of species that use vibration will simultaneously use airborne sound, spiders do not possess structures for hearing sound, and it is generally assumed that they do not use acoustic communication in conjunction with vibration.

The “purring” wolf spider (Gladicosa gulosa) may be a unique exception to this assumption. Males create vibrations when they communicate with potential mates in a manner very similar to other wolf spider species, but unlike other wolf spider species, they also create airborne sounds during this communication. Both the vibrations and the sounds produced by this species are of higher amplitude than other wolf spider species, both larger and smaller, meaning this phenomenon is independent of species size. While other acoustically communicating species like crickets and katydids have evolved structures for producing sound, these spiders are vibrating structures in their environment (dead leaves) to create sound. Since we know spiders do not possess typical “ears” for hearing these sounds, we are interested in finding out if females or other males are able to use these sounds in communication. If they do, then this species could be used as an unusual model for the evolution of acoustic communication.

Figure 1: An image of a male “purring” wolf spider, Gladicosa gulosa, and the spectrogram of his accompanied vibration. Listen to a recording of the vibration here,

and the accompanying sound here.

Our work has shown that the leaves themselves are vital to the use of acoustic communication in this species. Males can only produce the sounds when they are on a surface that vibrates (like a leaf) and females will only respond to the sounds when they are on a similar surface. When we remove the vibration and only provide the acoustic signal, females still show a significant response and males do not, suggesting that the sounds produced by males may play a part in communicating specifically with females.

So, the next question is- how are females responding to the airborne sound without ears? Despite the relatively low volume of the sounds produced, they can still create a vibration in a very thin surface like a leaf. This creates a complex method of communication- a male makes a vibration in a leaf that creates a sound, which then travels to another leaf and creates a new vibration, which a female can then hear. While relatively “primitive” compared to the highly-evolved acoustic communication in birds, frogs, insects, and other species, this unique usage of the environment may create opportunities for studying the evolution of sound as a mode of animal communication.