3pAO7 – “The use of passive acoustic to follow killer whale behavior and to understand how they perceive their environment within a context of interaction with fishing activities.” –  Gaëtan Richard

“The use of passive acoustic to follow killer whale behavior and to understand how they perceive their environment within a context of interaction with fishing activities.”

Popular version of paper
Presented Wednesday afternoon, December 4, 2019
178th ASA Meeting, San Diego, CA
Toothed whales feeding on fish caught on longlines is a growing issue worldwide. This issue named depredation has a serious socio-economic impact and raise conservation questions. Costs for fishermen include damages to the fishing gear and increased fishing effort to complete quotas. For marine predators, depredation increases risks of mortality (lethal retaliation from fishers or bycatch on the gear) and behavior changes, with a loss of natural foraging behavior for an easy human-related food source. Most of studies assessing depredation by odontocetes on longline fisheries have primarily relied on surface observation performed from the fishing vessels during the hauling phase (i.e. when gears are retrieved on board). The way odontocetes interact with longlines underwater thus remains poorly known. In particular, depredation by odontocetes on demersal longlines (i.e. lines that are set on the seafloor) has always been considered to occur only during hauling phases, when the fish are pulled up from the bottom to the predators at the surface. 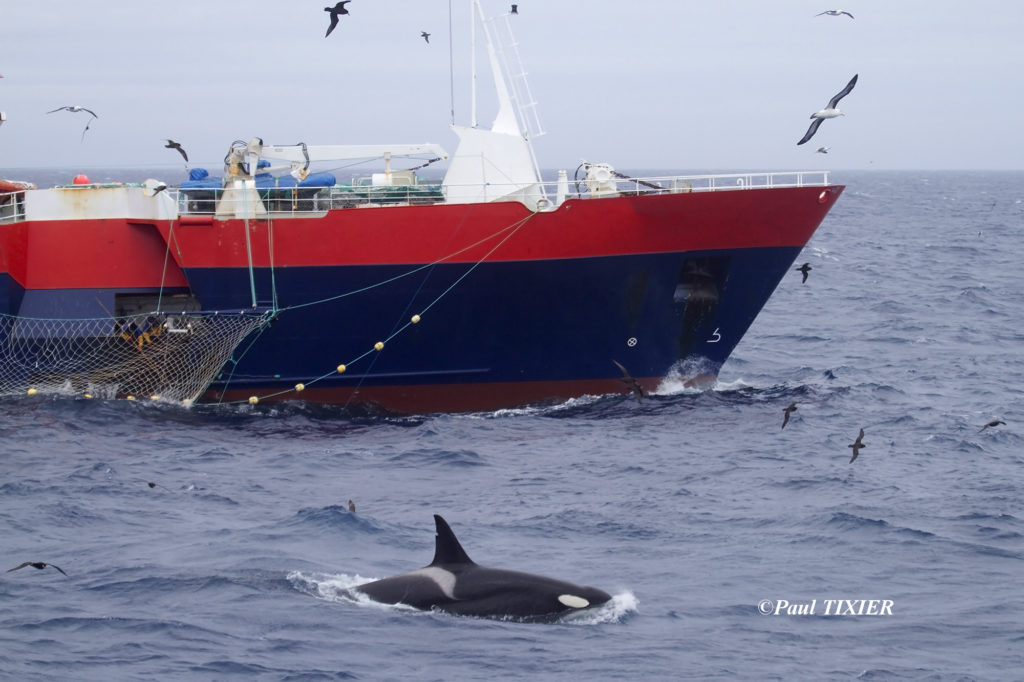 In our study, we focused on the depredation by killer whales on a demersal longline fisheries around Crozet Archipelago (Southern Ocean, Figure 1). Here, we aimed at understanding how, when and where interactions really occur. Recent studies revealed that killer whales could dive up to 1000 m, suggesting that they can actually depredate on longlines that are set on seafloor (remember that the traditional hypothesis was that depredation occurs only during hauling, i.e. close from the sea surface when the lines are brought back to the ship). In order to observe what can’t be seen, we used hydrophones to record sounds of killer whales, fixed on the fishing gears (Figure 2). This species is known to produce vocalization to communicate but also echolocation clicks as a sonar to estimate the direction and the range of an object or a prey (Figure 3). Altogether, communication and echolocation sounds can be used as clues of both presence and behaviour of these toothed whales. Additionally, as killer whales also sense the environment by listening to ambient sounds, we recorded the sounds produced by the fishing vessels, in order to understand more how these predators can detect and localize the fishing activities. 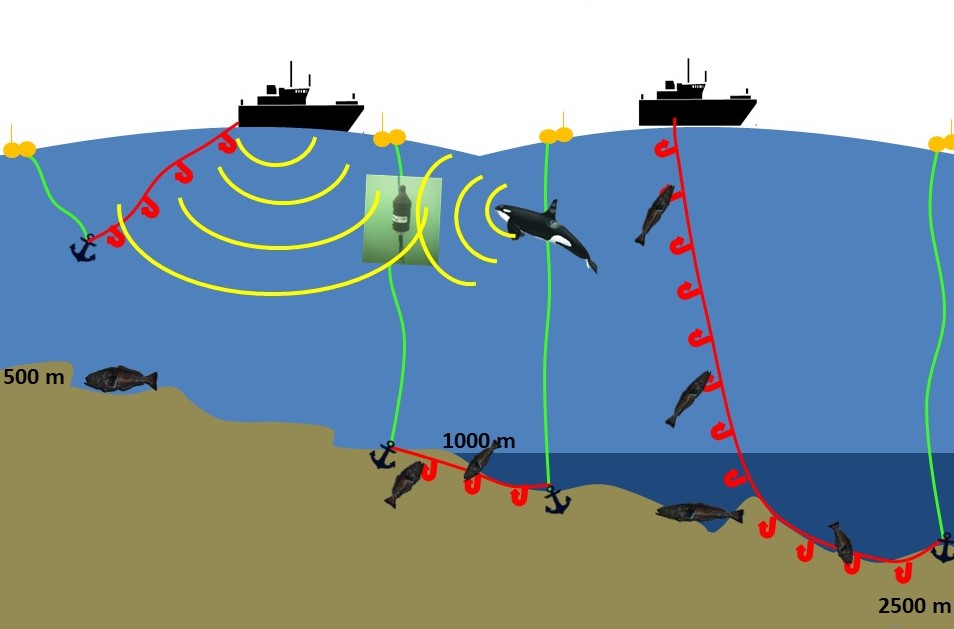 Figure 2. Scheme of fishing phases (setting, soaking and hauling) with the hydrophone deployed on a longline. 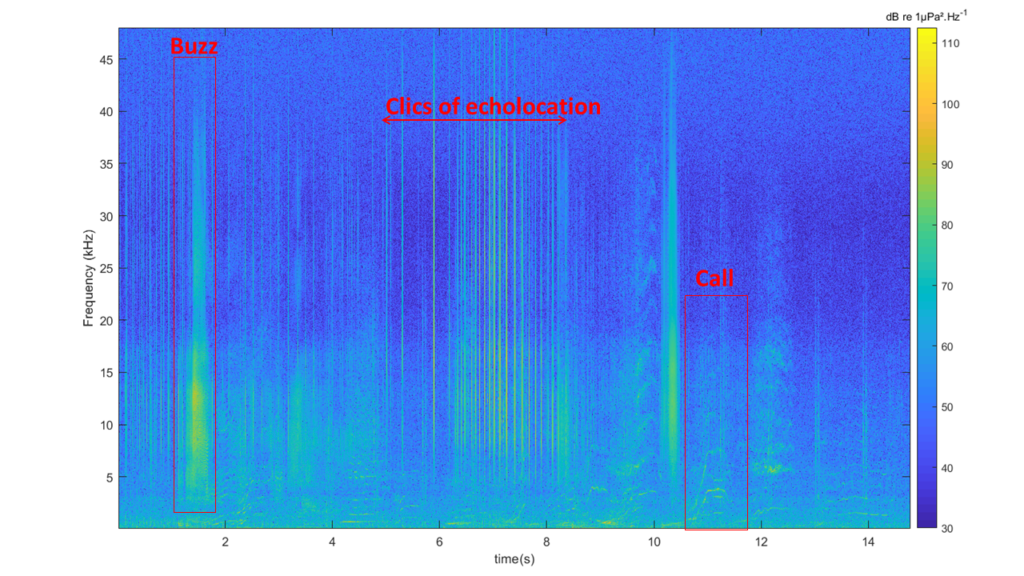 Figure 3. Spectrogram of killer whales’ sounds recorded around a fishing gear. This figure is a visual representation of the variation of intensities (color palette) of frequencies of sounds as they vary with time. On the recording we observe both calls (communication sounds) and clicks of echolocation, which can be heard as ‘buzzes’ when the emission rate is too fast to dissociate each click.

Our main result is that killer whales were present and probably looking for food (production of echolocation clicks) around the longline equipped with the hydrophone while the boat was not hauling or too far to be interacting with the whales. This observation strongly suggest that depredation occurs on soaking longlines, which contradict the historical hypothesis that depredation only occurs during the hauling phases when the behavior is most easily observed from the fishing vessels. However, this new results raises the question on how killer whales know where to find the longlines in the ocean immensity. However, we also observed that the fishing vessels produced different sounds between the setting of longlines and their hauling (Figure 4). We therefore hypothesize that killer whales are able to recognize and to localize the vessel activity using the ship noise, allowing them to find the longlines. 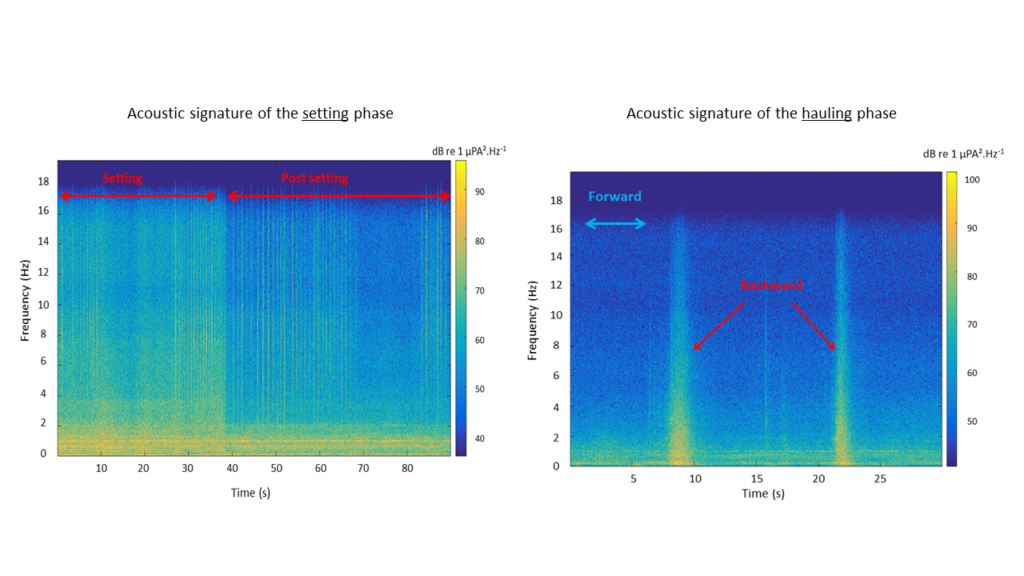 Figure 4. Spectrograms of a fishing vessel setting a longline (left panel) and maneuvering during hauling (right panel). On the first spectrogram, we observed a difference of sound intensity between the setting (until 38 s) and the post setting, while the vessel was still moving forward (after 38 s). On the second spectrogram we recorded a vessel going backwards while hauling the longline, such maneuver characterize the activity and increase the range that killer whale can detect the fishing vessel.

Our results are important to estimate properly how often killer whales depredate on demersal longlines. Besides, such understanding of the depredation behavior may help to find adequate mitigation solutions in the future.