3pMUb3 – Does the act of ‘playing’ a violin measurably change any of its acoustic properties? — preliminary results – Ms. Kourtney Adkisson

Does the act of ‘playing’ a violin measurably change any of its acoustic properties? — preliminary results

Among many violinists and luthiers, it is believed that violins need to be played (or vibrated) for some time in order for the tone to develop, a process known as “playing in.”  Although it is not uncommon for makers and sellers of violins to mechanically vibrate instruments continuously for several weeks before selling them, there is no scientific consensus on how, or to what extent, the instrument is altered in this process.

The work that we are presenting is the first stage of a long-term project that seeks to answer the question, “Does the act of ‘playing’ a violin measurably change any of its acoustic properties?”

Because many factors contribute to the sound that violins produce, it is challenging to identify changes in tonal characteristics that are due specifically to the cumulative effects of being played.  To address this challenge, we are conducting a systematic study utilizing three new sibling violins (Andre Tellis model 200, made in 2018):  two of these will be mechanically vibrated to simulate playing for several months, while the third will be a control – kept in the same environment, but not played.  During this time, we will periodically measure the vibrational and acoustic response of all three violins.

Before we begin artificially playing the violins, however, we need to understand how much variability we can expect in our measurements of the vibration response, which is essential for identifying subtle systemic changes in violin response that correlate with being vibrated over time.  Therefore, minimizing and quantifying measurement uncertainty is the objective of the initial phase of our project, which is reported here.

The measurement setup we evaluated consists of a violin that is suspended with rubber bands and excited by a mechanical shaker that exerts a lateral force on the bridge at many different frequencies, similar to forces exerted by vibrating strings.   A Laser Scanning Doppler Vibrometer (LSDV) is used to measure the vibrational response, or the amplitude of motion plotted as a function of frequency, at several locations on the top plate of each violin.  Information from all the scan points can be combined to construct an image of how the top plate is actually moving at each frequency. 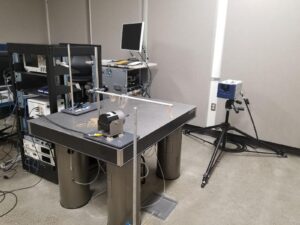 The LSDV set-up is shown including the acoustical table, laser head, computer, and mechanical shaker. 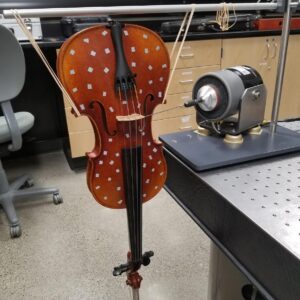 A violin is ready to be measured, the body suspended with rubber bands and a mechanical shaker attached.

Seven different modes are shown, in which the violin displays a dramatic response to a specific frequency. 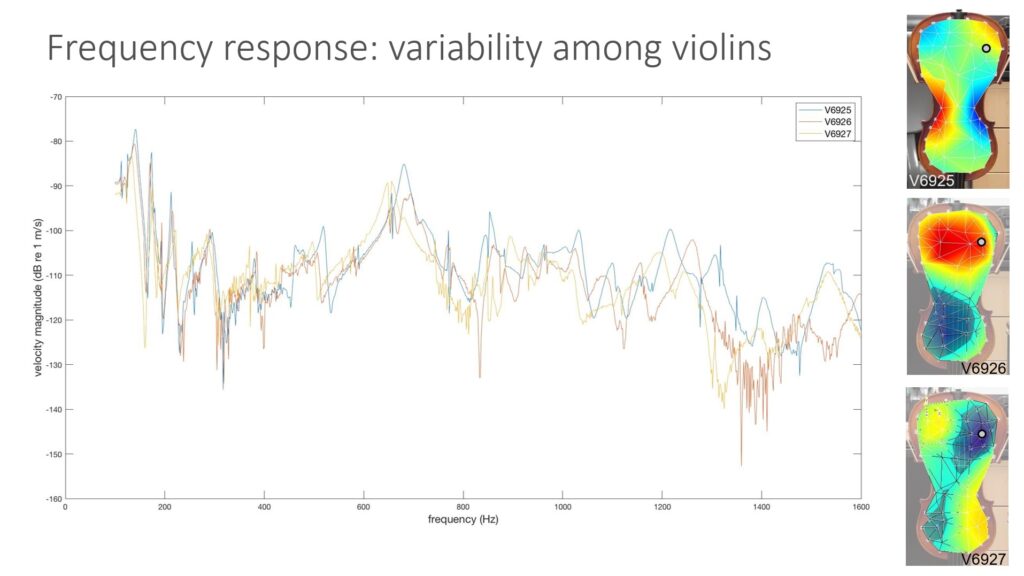 A comparison between the vibration response of three sibling Andre Tellis violins. 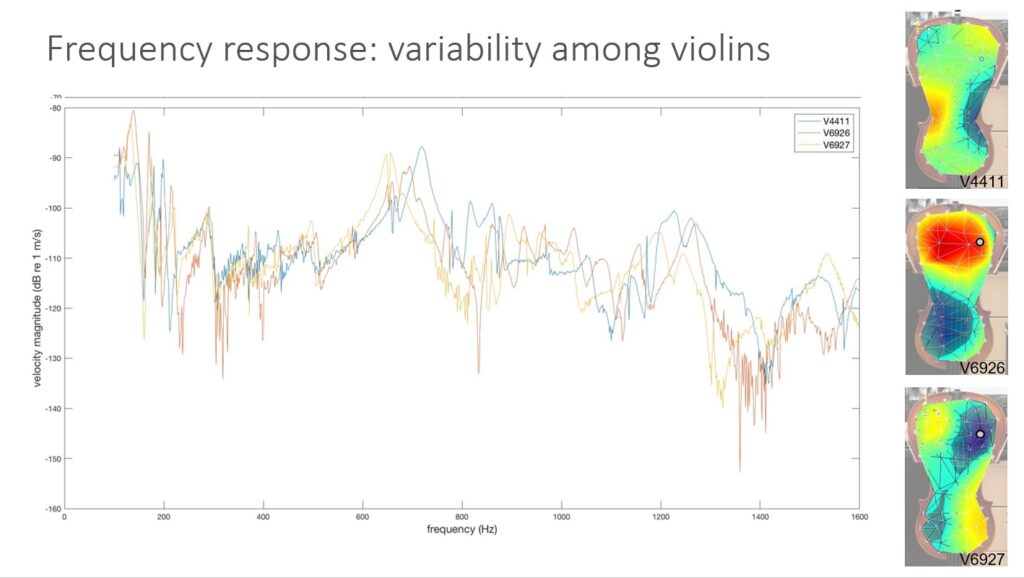 To assess the uncertainty associated with our measurement method, we measured the vibrational response of the same violin on different dates.  Our measured response curves for the same violin are quite similar, but they are not identical.  These preliminary results indicate inherent variability in our system caused by small differences in the testing set-up or by minute changes to the violins themselves. 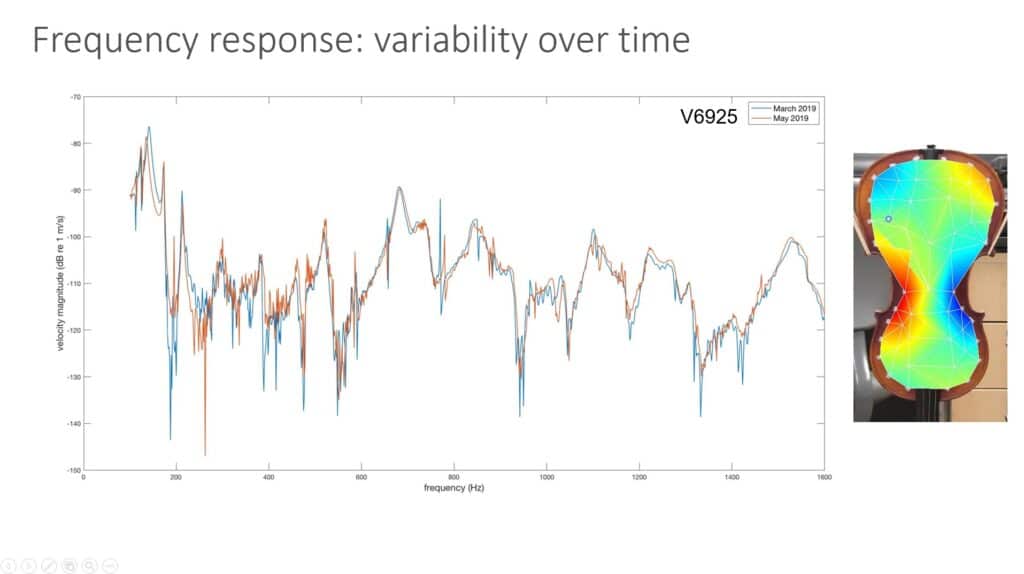 The vibration response for one of the sibling violins is shown for two different measurements in May 2019 and March 2019. 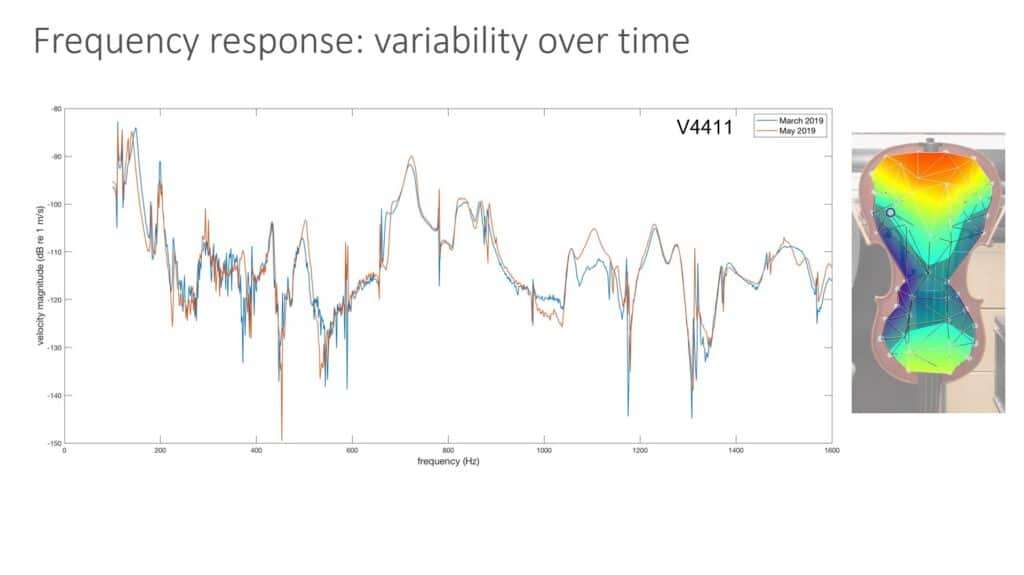 The vibration response for the Yamaha is shown for two different measurements in May 2019 and March 2019.

Additional measurements are needed to determine ways to reduce and quantify this uncertainty before we proceed with the next phase of the project.