Measuring audiological performance depends on the perception of individuals. To reduce the impact of individual behavior of subjects on measured results – a lack of experiment control, the degrees of freedom during an audiological study are usually strongly limited and important aspects of perception in real life are sacrificed in favor of control.

In recent years, efforts have been taken to substantiate the performance of hearing aids in real life situations. It is important to understand the listeners behavior in realistic acoustic environments, especially the potential differences between normal hearing and hearing impaired people.

The new “Real Life Lab” at Sonova brings the freedom to move around to controlled laboratory conditions. The lab provides a stage where persons can move around freely and interact with sound sources. The stage is surrounded by loudspeakers to present sound from all directions. Any motion by persons on the stage can be tracked in real time to regain the control. The motion data can be passively tracked or actively used to trigger audio and video reproduction. 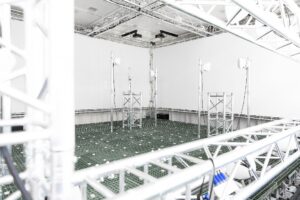 Caption Figure 1: The Sonova Real Life Lab with loudspeakers at the sides, below the floor and at the ceiling.

The lab is also used to investigate the behavior in acoustic scenes. A pilot study has been done, to find differences between normal hearing and hearing impaired. The subjects had to find different acoustic targets in a complex scene (Video 1). Their motion as well as there performance was tracked with motion capturing (Video 2).

The subject has to find different acoustic targets (a crying baby, a barking dog or a ringing telephone). The subject wears a hairband to track head position and orientation, a vest to track the torso and a controller to point to the found target.

Motion capturing view of the task. The three tracked objects are the head position in pink, the torso in orange and the pointer in light blue with a pink beam indicating when and where a target has been found. 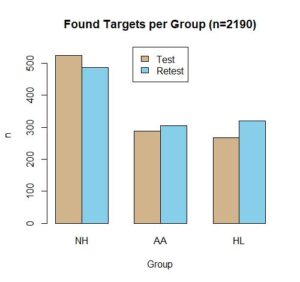 Number of found targets in an allowed time. 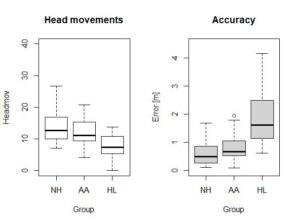